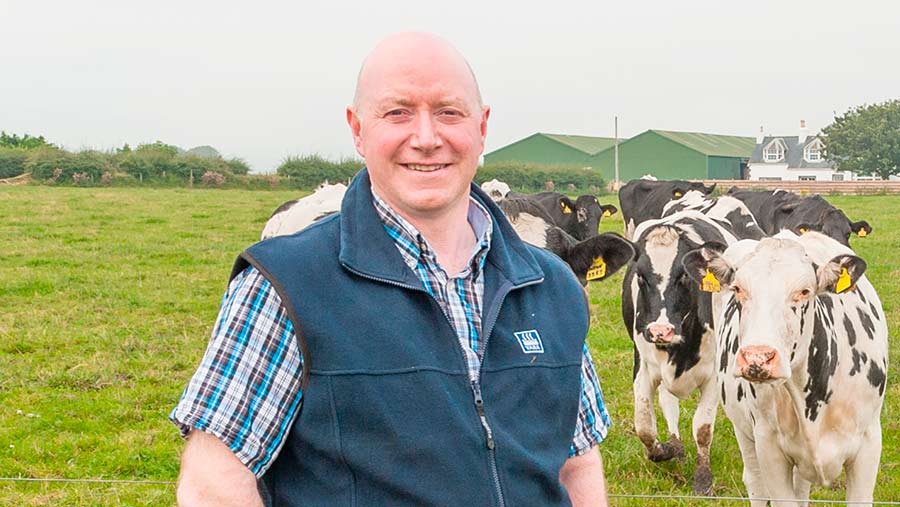 It’s great to report that we have had plenty of rain in this Devon-like part of Scotland. Zero-grazing stopped here on 5 July and resumed on 5 August – a full month of losing 1,000-1,500 litres/day.

Silage had to be increased again in the ration, so we mixed half of first-cut with some October-made fourth-cut,which has dropped production by 1-2 litres a cow.

This is very frustrating, but thankfully the price rises have kept our financial budget on target.

Forage stocks are very topical at the moment and if we had a few dry days, we would take a third cut in the hope that we can harvest more than half of the land in early October.

This can be dodgy, as it’s difficult to get in dry enough, but forecasters are fairly confident for a good spell for September.

We whole-cropped winter wheat on 24 July and three days later cultivated the stubble and drilled hum-bolt rye and 10kg of Italian ryegrass. The plan is to cut in late September and hopefully mid-April 2019.

I haven’t grown this for at least 12 years, but I thought it was worth a try in these extreme times, so it will be interesting to see how it feeds.

Part of my NFU Scotland work lately has been attending many shows. One of these was on the Black Isle, where last year I was fortunate to be part of the winning team at the charity tractor pull.

We had to defend our title this year, which turned out to be quite horrific. Our rope broke in two of the heats and after completing the final, I collapsed to the ground, turning a shade of white.

I was kindly walked to first aid and a nurse gave me a sweet that I didn’t really want. However, it was a lucozade sweet and within 30 seconds I was cured.

They took my blood pressure, checked my heart and my sugar, so the main issue was negative energy.

If I was a cow, I had ketosis. Unfortunately, I recovered too quickly to lose any weight.

I was proud of the little printout I received for my healthy ticker until a few days ago I read the small print and it said male aged 60. For a man the youthful side 50, how bad did I feel?