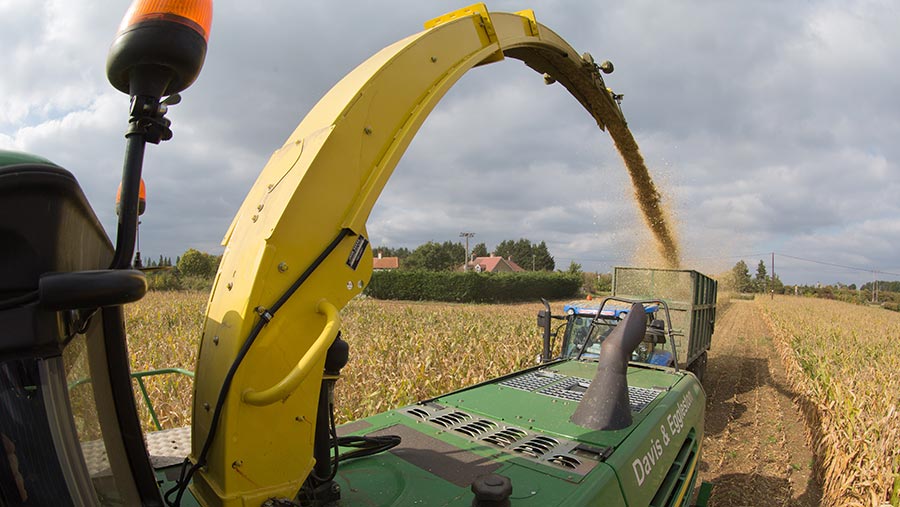 However, Neil Groom, technical director of Grainseed, advises growers to analyse their silage every month and adjust the ration according to the results to optimise performance.

For those who haven’t harvested

“In some areas plants have got very dry due to the speed of crop dry-down and insufficient chopper capacity,” he says.

“Normally dry matters increase 2-3% per week, but in September it has been 5% or more a week due to the lack of rain and drying winds. Harvesting teams cannot get around everyone quick enough.”

If the crop is very dry farmers should chop shorter (above 38% DM, chop at 10mm rather than the preferred length of 18-20mm) to aid compaction in the clamp, and fill the clamp in shallower layers and roll as much as possible.

It will also be worthwhile investing in a silage additive to improve fermentation and reduce heating on the face during feed out, according to Mr Groom.

Elsewhere, in more marginal areas with less heat units, crops are reaching full maturity which for many is two to three weeks earlier than normal.

“If rain has fallen recently and soils are wetter, then you may need to use a rotary brush to keep the roads clean and prevent accidents,” he says.

“Filling gateways with fresh stone and using farm tracks will minimise the issue of mud on the road.”

Once the field is harvested, rip the maize stubble to remove trailer compaction and prevent surface water run off.

Soil erosion can be significant even on shallow sloping fields, and ensuring that rain soaks into the soil rather than running off is important to prevent pollution of watercourses.

“Soils are still warm and we can expect grass to be showing in the row within 10 days,” he says.

“Later in October use grazing rye drilled at 180kg/ha to provide an early bite next spring before fields are drilled to maize in late April.”

He says all maize fields should be sown to a winter cereal, a cover crop or be ripped.

Mr Groom says bare stubbles are no longer acceptable as they increase the risk of runoff.

“Farmers can’t be fined for bare stubbles. However, the risk of soil erosion after high rainfall on a slope is significant and if the soil gets into a watercourse then the EA could potentially fine you for a pollution incidence.”