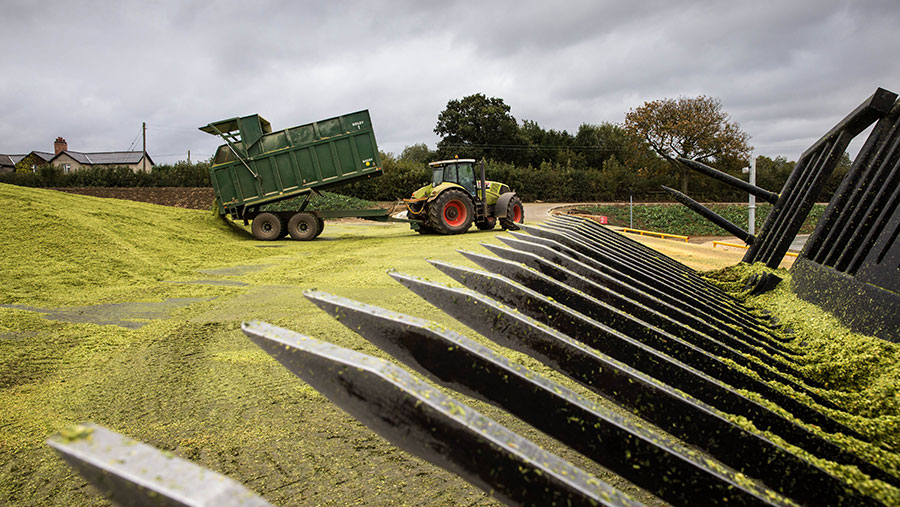 Maize is being harvested in all areas of the UK, with good yields reported from the field.

The heavy rain last week halted work for a few days, but the soils have quickly drained, and everyone is chopping again, reports Neil Groom, technical director for forage specialist Grainseed.

“Let the buckrake control the speed of chopping. Getting high density in the clamp is important to reduce losses during ensiling and feed-out,” he advises.

Compactor wheels are a good idea, he says, as they increase the weight rolling. However, he warns that they need to be used from the start of the clamp so high density is achieved throughout.

The buckrake and rolling tractors should equal 25% of the weight (in tonnes) coming into the clamp. For example, if an 18t trailer arrives every 10 minutes, that means more than 100t is being clamped an hour. Therefore, you need to have 25t of weight rolling – that is at least two machines working all the time.

Once maize has been in the clamp for four weeks, samples should be sent for analysis, advises Mr Groom.

“Sample across the face at all heights and thoroughly mix the sample before sub-sampling. Believe in the results and challenge the cows to eat more forage.”

He says forages should be sampled every month thereafter with a nutritionist, so rations can be adjusted to optimise forage use.

He adds: “Do a monthly feed budget, too, especially as the winter progresses, so you can make the best use of the cheapest feed you have produced on your own farm.”

Chris Blake, sampling for Farmers Weekly in Devon, has now harvested his maize. “Our crops have produced a good yield which, given the wet and cold May, I am happy with,” he says.

“We would normally drill Italians after the maize for the youngstock to graze next March, but I have changed the rotation and am drilling wheat, as I think the grass seedlings will be too small over winter to hold the soil together on some of our slopes,” says Mr Blake, who runs an autumn-calving dairy herd.

“We rely on maize for its energy to maintain milk in early lactation. We are really pleased that despite the challenging spring our maize crops have performed well again. This ensures we produce as much milk from forage as possible, and reduce the number of lorries coming down the farm drive,” adds Mr Blake.