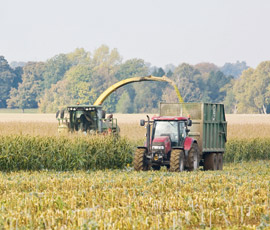 Maize growers should focus much more on choosing varieties for specific locations rather than using regional averages, suggest recent trials.

“It all points to varieties being a lot more responsive to their individual growing environment than many believe.”

Key requirement is for varieties to reach full maturity with maximum starch production rather than reaching the appropriate dry matter through simply drying down after they die, he says.

“We’ve found full maturity in more exposed parts of the South West can be best achieved through growing an earlier variety than the region’s climate may suggest. The best scenario wherever you are is to achieve a green plant with a mature cob at harvest and this is different to focusing purely on dry matter.