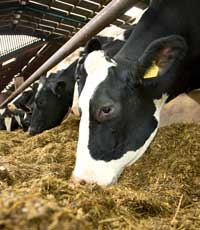 The persistent dry weather is likely to affect the availability of forage later in the year, despite good quality first cuts being reported by farmers.

Experts at Grassland and Muck 2011 told Farmers Weekly there is a real risk of forage shortages this year if the dry weather continues.

Peter Isaac of the Silage Advisory Centre said farmers in the east were more at risk of problems than those in the west: “Silage quality and quantity has been good so far, but in the east the dry weather is going to have an impact – quality will be good, but there just won’t be enough of it.”

This concern was echoed by Kingshay technical specialist Tom Bell, who said although the quality of the first cut has been good, the dry weather could result in a poor-quality second cut.

EBLEX livestock scientist Dr Liz Genever said: “Availability is an issue and the concern is whether people are planning well enough; most people we have spoken to are really concerned about where they’re going to get feed from.”

Huw Powell from the Grassland Development Centre at IBERS added: “Farmers need to start thinking carefully about what they need for the winter and thinking about how soon they have to close up to cut for silage.”