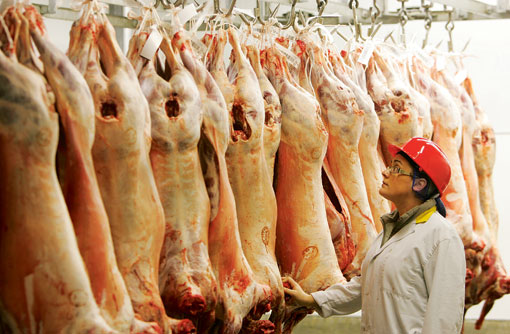 Adding treated linseed to the diet of intensively finished lambs will produce meat with the same flavour as lambs finished naturally on grass.

That’s the theory behind a new approach to indoor lamb rationing following its first on-farm trial in Lancashire.

Although the reasons for improved performance are still being evaluated, joint trial organisers Dunbia and NWF Agriculture were primarily interested in examining the effect on meat flavour when the diet of indoor hopper-fed lambs is bolstered with Omega-3 fatty acids.

Jonathan Birnie, Dunbia research and development manager, said the flavour of lamb was an important consideration of consumers.

“And it’s something that will become increasingly so as lamb becomes a higher value product. Producing lamb with the preferred consistent flavour of grass-finished animals will be an important marketing advantage to sheep farmers,” Mr Birnie told visitors to an open day at the Stott family’s Laund Farm, Chipping, Preston.

Dunbia said research over the last four years revealed the UK consumer prefers the taste of lambs finished off grass.

“But grass-fed lambs not only taste better, they are also a healthier source of red meat because they contain a higher percentage of polyunsaturated fat.

“Lamb has the potential to be a very healthy component of people’s eating habits and that’s something the industry needs to promote. But when lambs are finished inside on concentrates the flavour of the meat is degraded,” said Mr Birnie.

Laund Farm is a traditional upland beef and sheep unit but also milks a flock of 450 British Friesland ewes. Indoor-finished wether lambs from the milking flock, which are supplied to Dunbia at 12 weeks old weighing about 44kg, provided lambs for the trial.

The formulation of the ration aimed to “mimic” the feed value of grass by increasing the content of Omega-3 fatty acids via a treated linseed supplement.

“Lambs hydrogenate 60% of that Omega-3 and break it down. On a grass-based system lambs receive about 6g a day of Omega-3 fatty acid and that’s what we’ve been aiming to achieve in the formulation of this ration,” said Mr Hough.

Linseed – 23% protein and 34% oil – has half its oil content as Omega-3, but if pure linseed is introduced into a lamb’s rumen it is degraded.

“To avoid that happening we’ve had to protect the oil and the protein during the compounding process to create a ration that provides the 6g of Omega-3 fatty acid that would normally be consumed by lambs being finished at grass.”

Data collected from the trial showed lambs ate 25% more of the treated linseed feed – compared with lambs in the same shed fed a conventional NWF lamb finisher pellet – and growth rates increased by 35%.

Although taste improvement was the key driver in developing the treated linseed diet, Jonathan Birnie said there had been some “serious” improvements in carcass quality of lambs on the trial.

“We’d hoped that feeding the treated linseed diet would be a cost-neutral exercise for lamb finishers – in other words the higher price of the feed would be balanced by the higher value of the lambs. But in effect the diet has shown a distinct benefit in lamb value.

“In the first trial, 80% of lambs on the treated linseed diet achieved a U3L carcass compared with about 10% U3L carcass lambs from those fed an untreated ration. There are some weird and wonderful things that have emerged from this trial and we’re still evaluating the full range of benefits,” said Mr Birnie.

On average lambs on the new diet were worth £6 a head more than lambs on a traditional ration but intakes were higher and the new diet cost £70/t more which lifted feed costs by £4.50 a lamb.

Father and son team John and Simon Stott finish up to 800 lambs a year from their milking flock.” Lambs on the treated linseed diet were weighed fortnightly and showed an average gain of 2.5kg more a head than those on a conventional ration and reached their target weight 2.8 weeks faster,” said Simon.

“If this diet can produce indoor finished lambs with the flavour of those finished on grass it’s bound to help supply a consistent product to the market. It’s obviously palatable too because we’ve never had lambs come straight off the milk machine and take to dry feed as quickly as these did,” he added.

Added Jonathan Birnie: “We’ve now got to wait for the final analysis of the taste panels and if they confirm the improvement in flavour we anticipate there’s certainly a role for treated linseed to help sheep producers achieve a consistency in the flavour of lambs finished intensively – and that will become increasingly important to help maintain year-round lamb sales and consumption.”