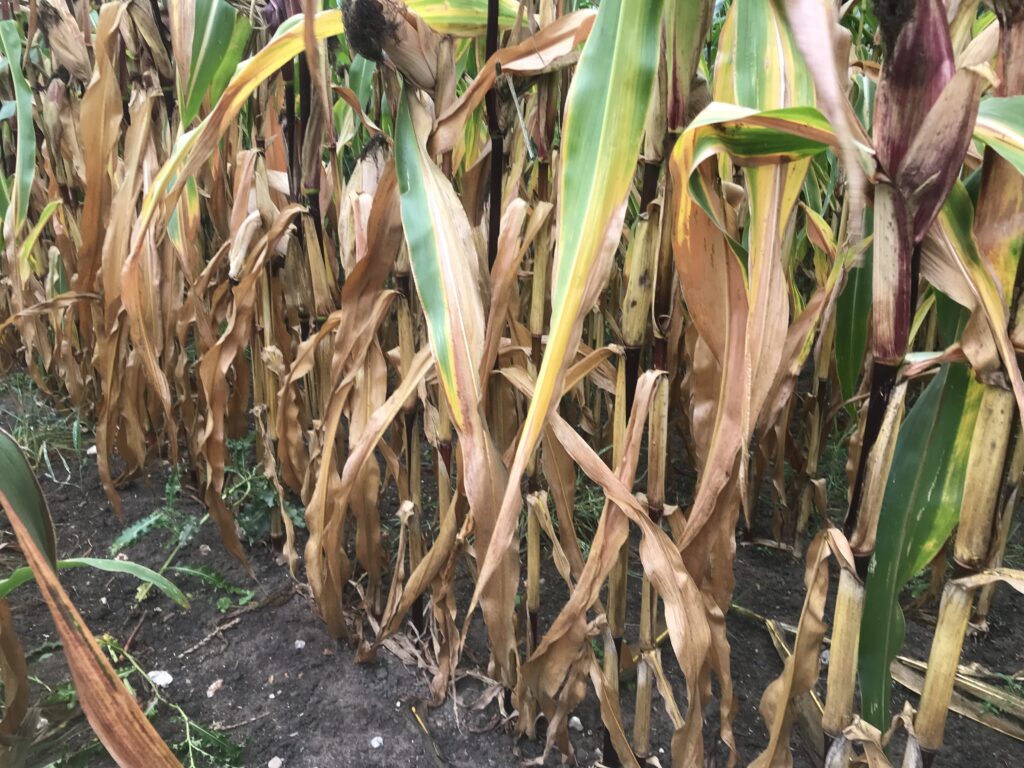 Maize crops in the South and on sandy soils are close to harvest, according to the latest Farmers Weekly Maize Watch report.

The high temperatures last week moved dry matter (DM) forward by more than 4% on sandy soils, and these crops are testing at more than 30% DM, according to Neil Groom, technical manager for Grainseed.

However, in places, this warm weather has resulted in plants becoming drought-hit, and all the lower leaves are dead – a combination of yellow and brown and no longer upright, he adds.

Growers should check the cobs on these plants and wait to get full grain maturity, says Mr Groom.

“If the leaves are dead there is less sugar and, therefore, energy. We want the grain to be fully mature so starch content is maximised.

“It’s a balance, since the dry leaf is harder to consolidate, but chopping shorter and using an extra buck rake or roller will help this,” he says.

John Hancock, sampling for Farmers Weekly in Sussex, has some good crops this season. “Summer rain has allowed the crop to express its full yield potential and cobs are very well filled. The plant is still too green for my liking, and I am planning to harvest early next week”.

“Ensure there is enough space in front of the clamp to allow easy access for the trailers, so they can be tipped across the full width [of the clamp].”

Oxygen barrier sheets and nets should be ordered to ensure there is enough weight on top of the film to keep the air out. More weight on top will result in better preservation in the upper layers of the clamp, advises Mr Groom.

“It is important to look at your fields twice a week now and to keep the contractor informed of your maturity so the harvest team arrives when your crop is ready,” he adds.

Target chop length should be discussed in advance with your nutritionist and the first trailers coming into the clamp should be checked to ensure this is met.

Independent nutritionist Hefin Richards, of Rumenation Nutrition Consultancy, says chop length will depend on maize DM and the level of maize in the diet.

The first few loads should also be checked for kernel processing, he adds.

“Every year, we see poorly processed crops which are a huge loss of potential and a waste of resource. The traditional view that a single crack in a maize kernel is sufficient is outdated.”

He says to assess effectiveness, take a one-litre container loosely filled with freshly harvested maize, spread it out, and count the number particles that are half a grain or more (one grain cut in half or two particles).

There should be no more than two halves or a small whole and a half grain.