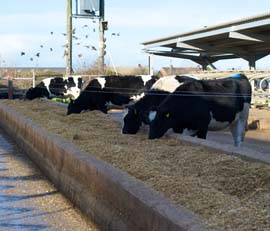 Many maize crops in England have now been harvested with growers reporting good yields commented Neil Groom, Technical Manager for Grainseed. “It is important to clamp mature maize so that the full benefit of forage maize in the ration can be observed.”

Speaking at the SAC’s Crichton Royal “Forage Maize Meeting for Marginal Areas” farm manager Hugh McClymont noted that growers who drilled late will have to make a decision soon on when to harvest.

“We ourselves have drilled a lot of maize without plastic after first cut grass, but the weather this summer with less sunshine and lower temperatures has not been good. I have green bulk, but no starch in the grain sites – what should I do? Cut before any frosting and ensile green matter, or hang on for maturity and accept frosted leaves?”

The advice of the meeting was that anyone cutting green material needs to put an absorbent underneath the maize in the clamp to soak up the juice, whether this is chopped straw (expensive this year), sugar beet pulp or citrus depends on local availability. Whatever happens you need to catch any effluent from the clamp to prevent pollution.

It’s the degree of frosting that matters on crops, said Mr Groom “If it’s just the top two or three leaves then don’t worry about it, but when the leaves below the cob are frosted then get the crop chopped and in the clamp. The problem with frosted crops is that yeasts and moulds grow on the dead leaves and these can cause mycotoxins to be present in the silage at feeding.”