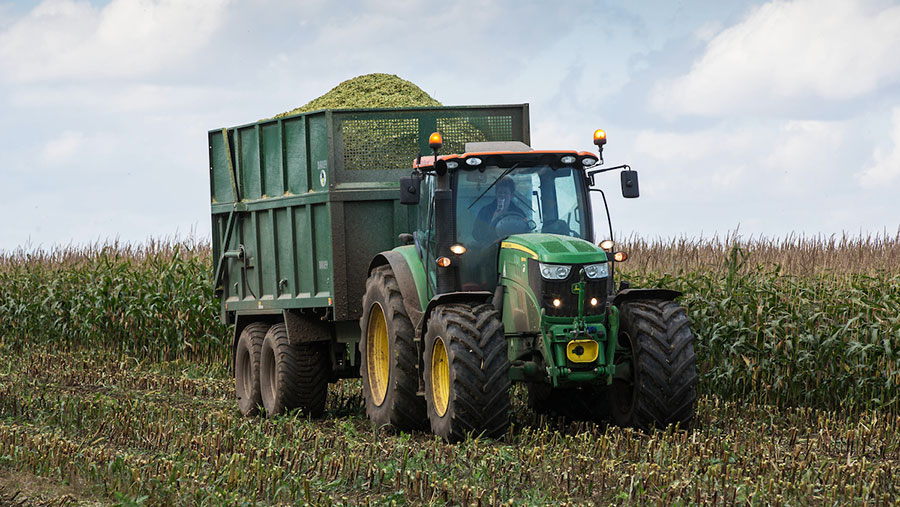 Maize analysis and yield systems are showing that crops harvested so far this year have been good quality.

According to Grainseed, many crops are now chopping at more than 30% dry matter and 30% starch.

“This is the aim of livestock and AD producers alike,” says Neil Groom technical director for Grainseed.

Mr Groom advises that crops should now ideally be sheeted down for at least a month so fermentation is efficient and the crop is well preserved, reducing spoilage and heating during feedout.

“We all know that maize feeds better after Christmas as the grains soften in the clamp allowing the rumen to extract more energy from the silage. This is particularly evident in cattle eating a lot of feed every day and where a feed is passing through the digestive system within 24 hours. These silages will benefit the most from a longer fermentation period,” he adds.

See also: 5 steps to make the most of maize silage in feed

As weather and field conditions drop in October, keeping safe is important. All staff should wear high visibility clothing, keep roads clear of mud and ensure lighting and flashing beacons are in full working order.

Two of the Maize Watch farmers who have recently harvested have shared feedback with Farmers Weekly.

George John from St Clears in south Wales said: “We had good crops in general, and a weather window has allowed us to start harvesting and get the crops off in good field conditions. I am encouraging growers to drill Italian ryegrasses to reduce nutrient loss and surface run-off, every field should be green and growing a crop.”

Across the border in Ticknall, Derbyshire, Robert Parker reported that he has been cutting on a contract basis and was aiming to cut his own crops as soon as the weather allows.

“I am intending to clamp the maize on top of second cut grass so that we only have one clamp open during feeding,” he said.

“Our suckler herd is just fed forage, no concentrates and we aim to sell all the youngstock as stores in the spring. The maize fields will then be ploughed and drilled with winter wheat as we rotate the maize around the farm.”