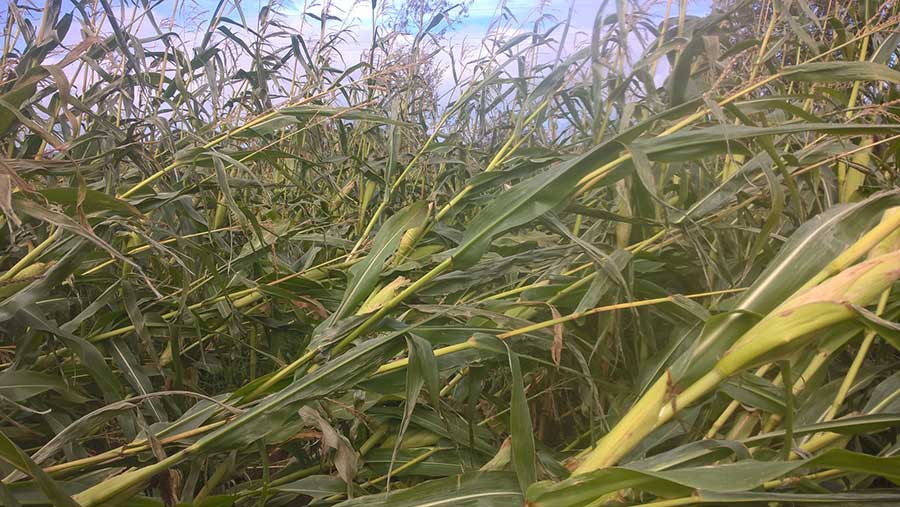 Following the recent stormy weather, some maize crops in the north of England and Scotland have lodged due to high wind speeds.

Neil Groom, technical director of Grainseed, recommends that lodged plants on the floor should be cut as soon as possible.

Most crops have knuckled over 2-3ft above the soil level and are not completely on the floor, so it should be possible to pick them up, but harvesting will take longer. And if plants are on the floor, they will need cutting in one direction or cutting with a designed header to improve crop pick-up.

See also: All the latest from the Livestock desk

Mr Groom explains how it happens: “As maize matures, sugars in the leaf are converted to starch in the cobs and the weight of the cob increases, so that at harvest the cob is 60% of the total yield.

“This acts as a pendulum in the wind and that’s why we have some lodging. As breeders we try to keep a healthy plant that is more robust, but there are limits.”

Another issue this season is smut, which has infected some crops, especially on sandy soils.

Spores are released in July and August and infect the plant where tissue damage has occurred. Because this is at flowering time, the spores tend to infect the cob, resulting in the loss of grain.

Smut does not affect the health of the cows, and silage containing smut can still be fed to cows with no problems.

The best control of smut is to rotate maize fields and plough trash as soon as the crop is harvested. If we have a cooler summer next year, we won’t see any issues.

Once the field is harvested, rip the maize stubble to remove trailer compaction.

This year’s early harvest still gives us time to establish Westerwold or Italian ryegrasses to soak up nutrients and prevent soil erosion.

Soils are still warm and we can expect grass to be showing in the row within 10 days.

Hugh McClymont, who samples for Farmers Weekly at SRUC Crichton Royal in Dumfries, has some damage on his exposed fields, but the crop is still standing despite winds recorded at more than 70mph.

“I have two weeks of last year’s maize silage in the back of the clamp, so I am hoping to stretch harvest for a while longer and let the contractors concentrate on farms with more damage than here at Crichton,” he said.