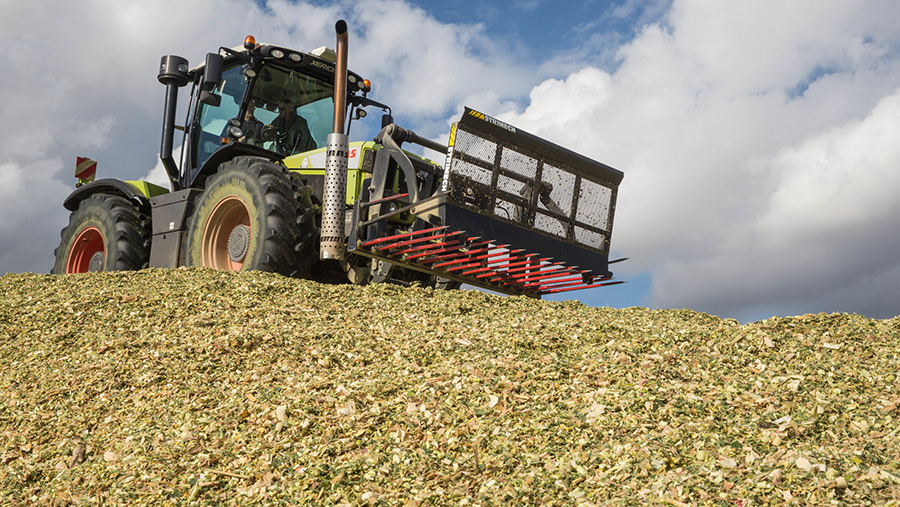 A quality maize crop this year means farmers should be looking to push production from their stock this winter, according to Neil Groom, technical director for Grainseed.

The early maize harvest with its high grain content will result in good starch levels.

This, combined with some good grass silage, means producers can challenge their cows to maximise production from forage.

Mr Groom advises keeping the clamp sealed for six weeks before feeding to maximise fermentation. “The grains will become softer and more degradable in the clamp.

It is then important to analyse the silage every month and adjust the ration to ensure you are pushing the cattle to maximise their use of forage,” he adds.

He advises farmers to not assume maize is 30% dry matter and 30% starch this season. “It is better than that,” he says.

“Initial starch analysis predicts that starch levels are at least 2-3% higher than the dry matters.

“I think this is because we had rain just before flowering, which produced some large cobs that have completely filled in the September sunshine” adds Mr Groom.

“We have moved to growing all the crop under plastic because we want an early-October harvest to enable us to drill wheat or grass seeds into the maize stubbles. The wheat or grass plants then use farm nutrients and prevent soil erosion,” says Mr McClymont.

“We harvested the first 17ha field on Friday last week and the HarvestLab sensor on the forager predicted that the dry matter was 38% so I have chopped the rest of the maize on the farm.

“The first field yielded 47t/ha and I have drilled it with wheat already.

“This year we applied foliar N in July and these crops have definitely responded with more plant bulk and yield. We thought the crop looked hungry at the end of June due to high winter rainfall and the cool spring, so we wanted to kick the plants on.

“They have responded well, you have to use all the tools in the box up here”.

This is the final week of sampling of Farmers Weekly’s maize monitoring crops, three weeks earlier than normal, since everyone will harvest in the next week.