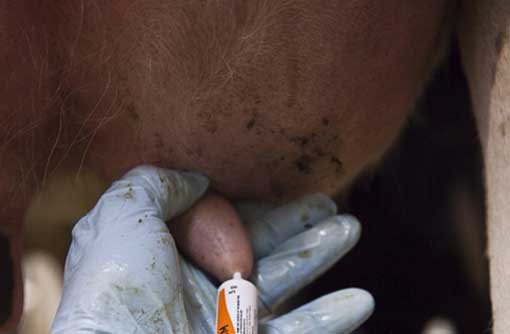 Vaccinating cows as a preventative mastitis treatment has made all the difference to the control of mastitis on a wide range of herds in Cumbria.

Some herds have been able to cut mastitis rates by up to 50%, with a big reduction in the retreatment rate also seen.

Vet Colin Lindsay of Capontree Veterinary Centre has been working with farmers in his area using the Startvac mastitis vaccine. The vaccine has been used to help tackle the two primary causes of mastitis – E coli and Staph aureus

“We’ve had some great results with this vaccine,” says Mr Lindsay. “And even where farmers have pulled out all the stops to try to control mastitis and still had a problem, this treatment has made all the difference.”

At Capontree this programme has been adapted to make it more convenient for farmers by injecting at drying off, as cows move into the transition group, and then at the fertility check at 45-55 days in-milk.

An alternative, which many farmers prefer, is a rolling quarterly programme. This involves vaccinating the cattle twice – 30 days apart – and then every three months thereafter.

As a result of using the vaccine, Mr Lindsay says lower-grade antibiotics are working to a greater effect to treat mastitis cases in herds on the vaccination programme.

“Where mastitis does occur in vaccinated herds we’re now having success using basic treatments such as penicillin and terramycin. And for me that’s been a really big benefit, because we can move away from having to use the more modern drugs and reduce the risks of resistance which the medical profession is concerned about.”

Mr Lindsay says when a cow suffers from a mastitis infection caused by Staph aureus it is necessary to find a clinical cure – but acknowledges in reality it’s difficult to achieve.

“In the majority of cases a sub-clinical cure is what we get; so while the cow no longer shows any clinical signs of mastitis, she still has an elevated somatic cell count.

“So, when a cow is treated for a Staph aureus mastitis infection you’d expect a 50-60% success rate. While we are still working out the precise figures on farms where the vaccine is being used, the retreatment rate of cows several weeks and months down the line has significantly reduced, so we must be improving the actual clinical cure rate. This is often reflected in the bulk tank, where we see a reduction in the somatic cell count.”

VACCINE USE AS PART OF A PACKAGE

Herds vaccinating their cows are still using dry cow tubes, but vets see the vaccination programme as being part of the overall armoury dairy farmers can use against mastitis at this stage. That includes maintaining high standards of management to reduce potential environmental risk factors.

Although the reduction in antibiotics use is considered by vets to be one of the big advantages of the vaccine programme, the cost benefits are also being recognised.

“Increased milk production from herds where mastitis is being controlled is a contributory factor towards justifying the cost of vaccination,” says Mr Lindsay.

Mr Lindsay also firmly believes the vaccine programme has a significant role to play in meeting the target figure for mastitis cases of 30 for every 100 cows a year.

“Few UK herds in the UK are at the target level, but the vaccination programme has a significant role to play if it is regarded as part of an overall approach to mastitis control involving cubicle bed hygiene, milking routines and drying off procedures.”