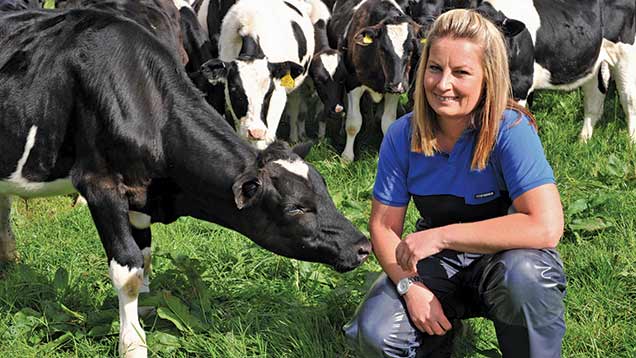 A Pembrokeshire beef calf-rearing unit has been achieving consistent growth rates in heifers and steers since implementing a robust health plan and treatment protocol to combat coccidiosis.

Warren Farm, near Castlemartin, established a calf-rearing enterprise six years ago. In the early stages the farm had a severe outbreak of coccidiosis, resulting in calf mortalities.

On the advice of the farm’s vet, Richard Davies, from Fenton Veterinary Group, they established the source of the infection and the potential disease triggers.

The farm found that calves were mainly contracting the disease when they were turned out from winter housing to grass, but there were also disease outbreaks in the sheds.

To mitigate the problems, they implemented new hygiene protocols, which have eliminated the need for in-feed prevention.

Calves are now housed in pens that are steam-cleaned, left to dry and then limed and covered with 10cm of sand bedding.

Claire Watts (pictured), who manages calf rearing at the farm, says there is minimal movement of calves, with only animals of the same age and size penned together. Beds are kept clean and dry at all times, with fresh bedding topped up daily for young calves.

“The feed and water areas are kept clean, we check the water bowls and cake feeders daily for faecal contamination,’’ explains Ms Watts.

Mr Davies says it is vital that calves are born and then housed in a clean environment.

Basic calf husbandry can both prevent coccidiosis and control it. “Calves can shed millions of oocysts a day, so isolating calves that have begun to scour is a simple but critically important control measure once disease has appeared,’’ he adds.

A close eye is also kept on stocking densities, and as the animals grow they are allocated more space.

The more oocysts there are in a calf’s environment, the higher the risk it has of developing coccidiosis, explains Mr Davies.

“Oocysts persist for a long time in faecal material, so any build-up of faeces increases oocyst numbers,” he adds. “This is aggravated by overcrowding or not cleaning pens adequately between groups.”

Individual housing systems help to reduce the risk, but if these can’t be cleaned properly between calves then disease spread is still possible.

Ms Watts says she watches the calves closely after stressful events such as dehorning and castration, which can trigger a bout of coccidiosis. This makes early diagnosis and treatment easier.

At turnout, calves are exposed to potential coccidiosis eggs for 10 days to build up resistance.

A faecal egg count (FEC) is then carried out and if the reading is 3,000 oocysts per gramme or higher, calves are treated with an anti-coccidial drug.

Fifteen days later, the FEC test is repeated and, if the reading is high, calves are treated again.

By having a herd health plan in place, including routine vet visits, the business has been able to isolate and diagnose the disease and ­pinpoint the best time to treat ­animals.

The result has been more consistent growth rates. “We no longer get groups of poor doers,’’ says Ms Watts.

“We are able to get all the heifers up to bulling weights at grass and we are getting consistent growth in the beef animals. We can’t afford to lose any daily liveweight gains in beef and when animals are free of coccidiosis we can achieve daily liveweight gains of 0.8kg in the first year and 1kg in the second year with black and white calves and native breeds.’’

Coccidiosis is caused by parasites known as coccidian, found in the large intestine. Infected calves excrete large numbers of oocysts in their dung that are the source of coccidial infection.

When oocysts are ingested they reproduce many times as they pass through the gut; this means that thousands of new oocysts are excreted in faeces from a single egg.

It can take two to three weeks to complete the life cycle, depending on species.

Symptoms vary from calves being poor doers to death. Classic signs of infection are weight loss, mild dehydration and a bloody scour.

How is it diagnosed?

Diagnosis is by a combination of faecal testing and clinical signs.

How can it be treated?

Treatment needs to be quick because once a calf has symptoms its gut lining will have been damaged and some of this damage will be permanent. If one animal in a group shows symptoms, the whole group should to be treated.

It is important to understand the risk factors and the life cycle on farm and then discuss the various treatment options with your vet and formulate a working health plan.