One mixed farming enterprise is maximising its output and reducing blackgrass problems by growing the perennial energy crop miscanthus.

As well as optimising land use on the mixed 1,250ha estate in Bourne, it has also allowed the family to fulfil their desire to bring livestock back to the farm, having paved the way for the establishment of a 180-head suckler herd.

This is enabling the Richardson family to produce their own beef for the family pub and restaurant business, the White Horse. 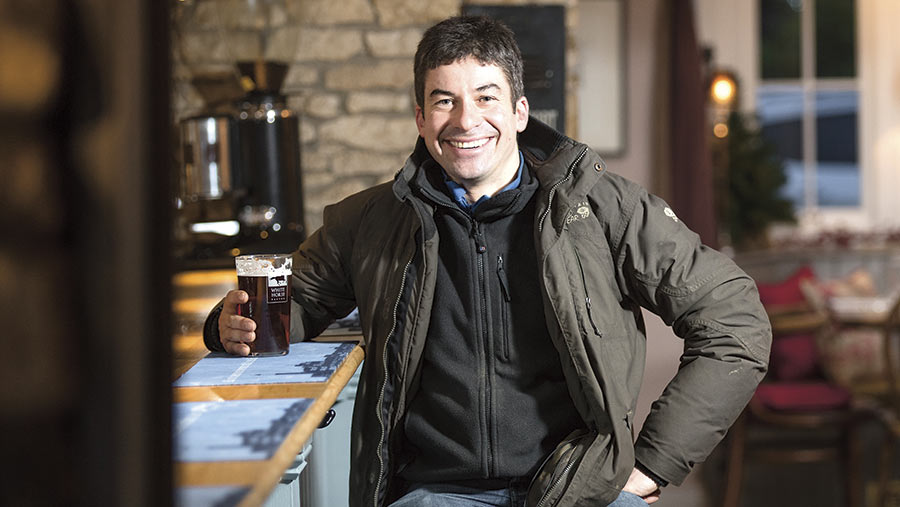 Mark Richardson in his pub, The White Horse

“The move has helped to optimise growth opportunities on the estate, and because it’s a ‘hands off’ crop, it has allowed us to explore more diversification options,” says Mr Richardson.

“We first looked into growing miscanthus because our marginal land – which sits over gravel and is skirted by marshland – failed to yield reliable, good-quality wheat and oilseed rape, and we had blackgrass resistance issues.

The biomass crop is known to thrive on lower-grade land, and out-competes blackgrass because of its high canopy,” explains Mr Richardson, who adds that the land was also prone to drought.

After visiting farmers who were growing the crop, Mr Richardson decided to plant 18ha on the estate’s marginal land.

“Our primary arable crop is wheat, but in addition, we grow oilseed rape, spring barley and beans, and we let out land for potatoes and onions.

Miscanthus felt like a crop with a future, which would allow us to enter a new market, provide a diversified income stream and a guaranteed income from land that was marginal,” he says.

Mr Richardson is signed up to a five-year base level contract linked to the Retail Price Index with miscanthus supply chain specialist Terravesta.

The company secures the end market for the crop, and also provides technical advice on growing and management. The long-term index-linked contract is updated annually, and ensures that returns keep up with inflation. 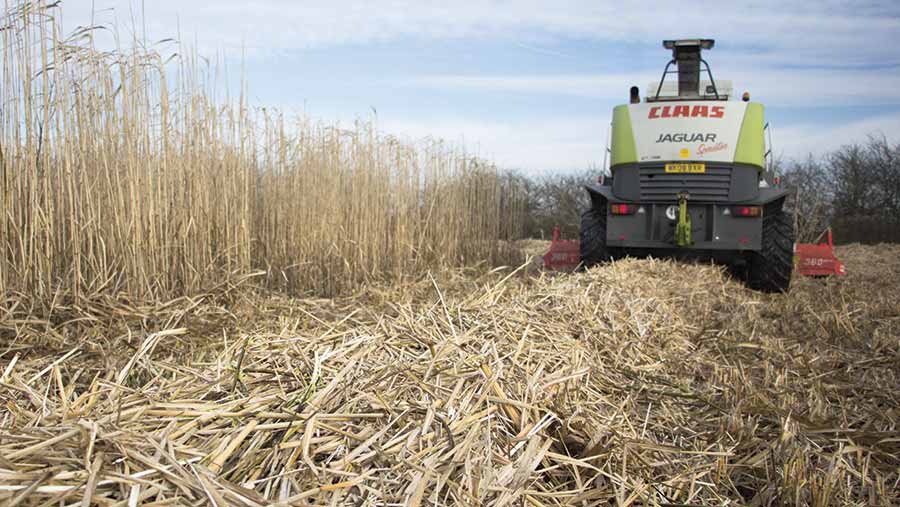 The crop was planted in the spring before the ground dried out. It cost £1,200/ha to establish – that included the rhizomes and planter, plus the cost of the herbicide programme after planting.

Once the crop is established, no fertiliser, pesticides or fungicides are needed, and a herbicide should be applied every two to three years.

The crop was established by a manual rhizome planter, which was provided by Terravesta on delivery of rhizomes.

To get a good establishment, the soil was prepared well in the autumn before planting the following spring. In heavier clay soils, they need to be ploughed and subsoiled well in autumn.

If it’s left to overwinter, the frost will break down the soil further, leaving it finer for the following spring.

Before establishment, Mr Richardson waited until the weeds started to grow before spraying them off. He then worked the field down to a fine tilth with a power harrow close to the planting date.

He says it’s imperative any weeds that arise after planting are combatted immediately, with a post-emergent herbicide. However, once the miscanthus shoots come through, no herbicide should be used as you run the risk of damaging it.

Once the crop is established, it requires little management, which has allowed Mr Richardson to focus on other areas of the business, namely the estate’s beef enterprise, which comprises 180 Hereford cross Friesian cows, which are mated to Hereford and Belgian Blue bulls.

The herd is grazed on a mix of permanent pasture and new leys, and during the winter cattle are fed a combination of grass silage and pea silage. Meanwhile, youngstock is creep fed rolled barley and beans.

“I had a lot of existing grassland made up of river banks and traditional permanent pasture near the village, so we decided to take the grazing of this back in house, where it was previously let,” he says.

The is aim is to produce large stores that finish off grass by 18-10 months, at 425-450kg, with housing restricted to once.

Enough animals are kept to meet the demand of the restaurant, where the whole carcass is used on the menu.

Now in his fifth year of growing miscanthus, Mr Richardson says yield has improved year on year and, to date, there have been no blackgrass issues.

Yield has increased from 7.4t/ha in year three to 10t/ha in year four and 12.35t/ha this year. This year’s harvest will have provided him with a net return of £802/ha, after haulage.

Baling takes place from April onwards, and the miscanthus has to dry out when it’s been cut and gets laid in the “swathe” (laid in a line so the sap dries out of the canes).

Bales are Hesstons with a moisture content of less than 16% and are supplied to Brigg (North Lincolnshire) whole-bale power stations.

“My calculations indicate that this spring I’ve harvested 1 tonne per acre [0.4t/ha] more than last year, which reflects the season and the continued maturity of the crop,” adds Mr Richardson.

“The challenge in all farming sectors is to continue to be profitable, but I see diversification as a key part of achieving that.

“First, there are many inputs required for beef production, such as straw, barley, beans and silage, that I can generate myself as well as selling to third parties.”

In time, he’d like to invest in new housing for the growing herd and develop a supply arrangement to use suitably sized miscanthus pellets in a biomass boiler in farm buildings and the new residential rooms at the pub.

“Miscanthus has allowed us to spread risk through decent site selection, and we’re now able to grow a crop that’s suitable for the ground, where other crops wouldn’t flourish.

“It’s the combination of all areas of the business including arable, beef production and the restaurant business, that allows me to manage the peaks and troughs of farming, and explore what’s possible in terms of growing the business in the future.”