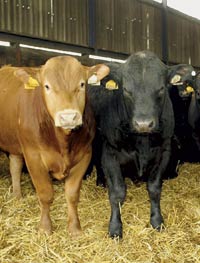 Farmers are being urged to report any unknown livestock health problems to their vets, as new and emerging diseases have been identified.

Speaking at the Dairy Event and Livestock Show, David Harwood of the Vet Lab Agency (VLA) said psoroptic mange and blood sweating were two new problems to watch out for.

“Psoroptic mange has not been seen since 1980s, but this year alone eight cases have been reported compared to the first two cases last year.

“Severe psoroptic mange has severe effect on cow health and welfare, with nasty lesions making it an unpleasant condition,” he said.

Mr Harwood was unsure why there were new cases, but said stock could only be treated using pour-on synthetic pyrethroids as avermectins had no response.

Blood sweating was another condition being reported more often, with beef calves mainly being affected in Scotland and dairy calves in England.

“Again we have no idea where this disease is from,” said Mr Harwood. “Blood sweating was identified in Germany two years ago and had been on the increase in the UK since. We believe the problem could be something to do with bone marrow, but we are not sure what is causing it.”

The physical symptoms are spontaneous bleeding through the skins surface, including the eyes, and although it affects all breeds of cattle, all the animals being affected are under one months of age.

But although these diseases are relatively unknown, one disease making a come back is botulism.

“Five to seven years ago this started to emerge again causing paralysis in cattle, with mortality rates high,” he said.

Mr Harwood believed cases of botulism could be linked to use of broiler litter. “Cattle farmers storing or using broiler litter is where we have seen cases and we believe it could be decaying broiler matter in the litter producing the toxins,” he said.

Liver fluke also seems to be “changing big time,” said Mr Harwood. “In 2009 we have seen high level of cases in sheep and we believe this is associated with new infection in January through to March, and this could be because of increasing levels of resistance.”

Mr Harwood said a change to the routine treatment approach may have to be taken.