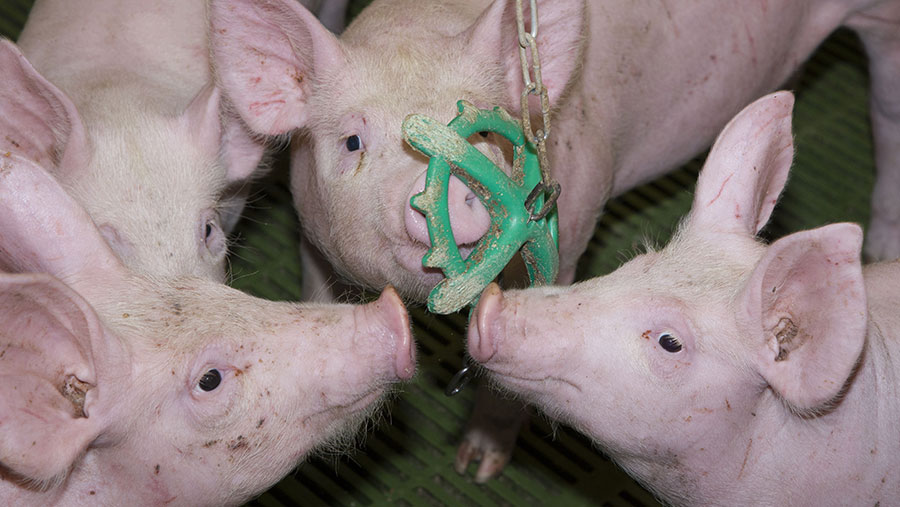 Ambitious targets for further reductions in livestock antibiotics have been published by the pan-industry alliance Responsible Use of Medicines in Agriculture (Ruma).

Ruma published the targets after government figures showed sales of livestock antibiotics have fallen by 27% – to their lowest level since records began in 1993.

The headline targets include a reduction in use of antibiotics in pigs by more than 60% between 2015 and 2020, with minimal use of critically important antibiotics (CIAs).

CIAs are antibiotics deemed vital for use in human medicine.

Data released earlier indicates a good start has been made, with usage in the pig sector falling by about 35% between 2015 and 2016.

Pig Veterinary Society president Mark White said he was pleased such a significant milestone had been reached in the first year of concerted efforts to reduce antibiotics use.

“It’s encouraging to see the response in the sector to the challenge laid down, which bodes well for achieving our ambitious 2020 goal,” he said.

It was evident the pig sector had the will and the capability to fully engage with the issue.

Mr White said the next steps were to focus on eliminating routine preventative treatment where it is still happening, mainly due to lack of resource or expertise.

He added: “We can also work to improve water delivery systems so that more targeted treatment in the water can be used instead of in-feed medication.”

The dairy cattle sector has committed to a 20% reduction by 2020, with a particular focus on halving use of the highest priority CIAs.

It would also see the reduction of group treatments, such as antibiotics foot-baths for lameness and instead using topical and targeted treatments.

The beef and sheep sectors are already low users of antibiotics, but have acknowledged they each need better data, and will also commit to addressing “hotspots” of use.

Both have committed to a 10% reduction in antibiotics use by 2020, subject to securing better data.

For the beef sector, reduction in use centres around calves and youngstock, particularly in the areas of respiratory disease.

There is also an emphasis on calves from dairy herds, where mixing animals from different sources can create a peak in disease pressure similar to children going to school for the first time.

In sheep, the focus areas are to reduce routine preventative antibiotics usage against abortion (miscarriage), lameness and neonatal lamb diseases such as watery mouth and joint ill.

Three sectors – poultrymeat, laying hen and fish – are either already low users of medicines or have made significant reductions over the past five years.

These sectors will be focusing on maintaining use at the minimal level needed to ensure good health and welfare among their livestock, while tackling emerging challenges should they arise.

The poultrymeat sector, previously described as a “pathfinder” for the rest of the farming industry, has already reduced use by 71% between 2012 and 2016.