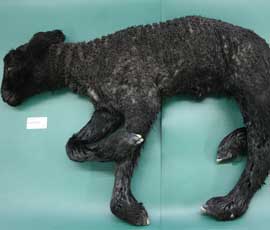 NFU Scotland has warned livestock keepers not to be complacent over the Schmallenberg virus despite surveillance showing lower than expected levels of the disease north of the border.

NFU Scotland has been monitoring a network of dairy farms across Scotland for presence of the virus in bulk milk tanks. No positives have yet been confirmed in samples tested by the SRUC and Biobest.

But the union said that cases of SBV were recorded in Scotland earlier this year and urged livestock farmers to continue working with their vets to form a strategy to protect cattle and sheep.

The availability of a vaccine means it may be possible to vaccinate sheep and cattle before they become pregnant and Scottish farmers should be discussing with their vets whether vaccination could help protect their stock, the union said.

“While our surveillance has yet to show any significant spread of the virus, and the number of positive cases identified through veterinary surveillance grows slowly, I would urge all livestock farmers not to take their eye off this disease. The vast majority of livestock in Scotland remain vulnerable to this virus.

“Experience in England and other parts of Europe suggests that the spike in viral activity may still be to come and recent warm temperatures may be storing up problems for later in the year. That means for those with early lambing flocks and autumn calving herds, now is the time to sit down with your vets and think about protecting stock before the rams or the bulls go out.”

Mr Miller also said that while vaccination came at a cost, the losses generated by infection of animals while pregnant were stark.

“The costs associated with stillbirths or caesarean sections to remove deformed lambs or calves could soon mount up if a herd or flock becomes compromised at a crucial time in the breeding cycle.

“NFU Scotland wrote to all its members in July, urging them to assess if their livestock are at risk of contracting SBV. If the answer is yes, then our advice remains that you should, in conjunction with your vet, put an action plan in place,” Mr Miller said

The Schmallenberg virus is spread by midges and has spread through Europe with almost 2,000 cases in the UK.

Exposure to SBV can result in relatively mild conditions in cattle and sheep but where infection takes place during the early stages of pregnancy (25-50 days in sheep, 70-120 days in cattle) it can result in congenital disorders of lambs and calves. Infection also causes a drop in milk production and may also be linked to poor breeding performance.