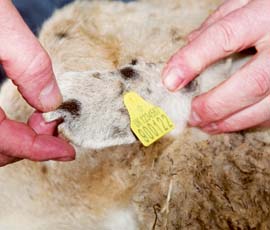 Welsh sheep producers are to be denied any level of tolerance if they fail to read electronic identification tags correctly.</P>

Wales’ deputy farming minister said his decision to allow no tolerance on sheep EID was based on an analysis of 2011 inspections which showed that no Welsh farmers would have qualified for the limited tolerance permitted by Europe.

This means that farmers who fail to record individual identities in their record books as a result of missed reads will be penalised.

“I have made this decision having balanced the resource implications of introducing an additional complicated – for farmers and for officials – set of rules that we would have to be communicated to farmers and the fact that no farmers would qualify for the tolerance in 2011 set against the risk to Welsh budgets of potentially €3.4m disallowance,’’ he said.

The announcement has disappointed the farming industry. NFU Cymru president, Ed Bailey, said he was “surprised and disappointed’’ with the decision.

“Whilst we accept that the tolerance the Welsh Government could implement in Wales was limited it did at least give some flexibility and acknowledgement that it is not possible to read EID tags with 100% accuracy, 100% of the time,’’ he said.

“Numerous trials in Wales and beyond have confirmed that this is the case and now our farmers could face significant cross compliance penalties for an issue that realistically they cannot control.”

Mr Bailey believed that by making the decision, the Welsh Government was effectively “closing the door’’ on achieving further successes in minimising the impact of the regulation on farmers.

The Welsh Government plans to establish a Sheep EID Database for Wales because it says this will strengthen its management of the system.

Alun Davies expects to make an announcement on this at the end of February.

Have your say on EID on our forum.