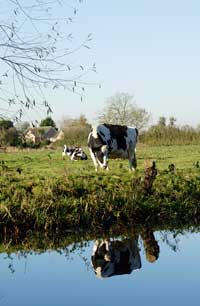 Livestock farmers must use pesticides more responsibly to prevent potentially costly restrictions to their use, says James Clarke, ADAS.

Talking in light of a recent report into weed control in grass and forage crops by ADAS, EBLEX and DairyCo, Mr Clarke says the most significant costs to the livestock sector will result from reduced ability to use many clover safe herbicides.

“If non-clover safe herbicides have to be used, the loss of white clover in grass leys could cost and extra £180/ha to compensate for lost N.”

The revision of EU legislation and implementation of The Water Framework Directive (WFD) both threaten the availability of pesticides, he says.

“Just because livestock farmers tend to use less sprays than arable farmers, doesn’t mean they should not be concerned.”

“If chemical levels in water remain unsatisfactorily high, changes to the WFD could result in restrictions in chemical use. This would not only have huge implications on grassland production, but could also result in rising arable feed costs.”

It is therefore essential farmers improve their pesticide use to prevent water contamination.

Ensure there is no risk of drift or overspray reaching water, says Elizabeth Berry of DairyCo. “Leave a five metre unsprayed strip next to ditches and watercourses and consider using drift reducing nozzles.”

Ensure filling and container cleaning take place well away from drains and watercourses. “Equipment can be cleaned over a biobed,” she says.

“Also, pesticides should not be applied to dry, cracked or saturated soils or if rain is expected within 48 hours of application.”

The need for pesticides can also be reduced through good management, says Dr Vickers. “Farmers need to be less reliant on sprays and look at alternative to minimise spray use.

“For example, by avoiding poaching or other sward damage around gateways and troughs, weeds will not be able to establish in the sward.”

Selecting specific grass and clover varieties for disease resistance could also be beneficial. “By selecting hardier and more grazing tolerant varieties, there is less chance of weed penetration.”

And the loss of specific broad-leaved weed herbicides could cost up to £95/ha in lost feed value in forage brassicas due to uncontrolled broad-leaved and grass weeds, warns Dr Berry.

“Rotation and variety choice can reduce the need for pesticides. Avoid growing forage brassicas in close rotations with other brassicas, such as oilseed rape, to reduce club root risk.”