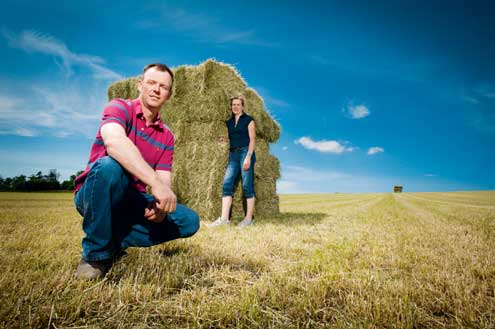 At last more settled weather has allowed us to get on with harvest. The spring barley has been cut and hopefully by the time you read this article the wheat will be cut too.

Yields have been disappointing, with winter barley three-quarters of a tonne an acre down and spring barley half a tonne an acre down. Having our own weighbridge this year has allowed us to accurately work out what the yields have been, rather than estimating them. The quality of the spring barley is also poor, with some samples producing high screenings. This barley is now on the feed pile and the better samples have been sold. Despite the crops being of poorer quality, there is plenty of straw.

The wet ground has caused problems for the combine and without four-wheel-drive it is doubtful whether in some areas it would have been able to get over the fields. It has not just been the combine that has had problems with the wet ground. Jac ran into difficulty when she took the pick-up to a barley field to deliver lunch and had to call on the JCB to remove her from a bit of a muddy hole.

After waiting so long for our grain store to be up and running, we have now got our new grain drier working too. After quite a lot of work getting it set up correctly it is now working well and is a huge time saver. The other benefits that we had been hoping for such as producing less dust and noise for our neighbours in the cottages have also come to fruition. It is a shame that the neighbours who caused us so many problems last year when we were trying to get planning permission for the shed have now sold their house and moved away. It would have been good for them to see the shed finally in operation.

Robert and Jac Neill run 300 Limousin-cross cows on 1,082 acres at Upper Nisbet in the Scottish Borders. They farm 600 acres of cereals, and all progeny from the suckler herd are finished on home-grown fodder and sold live throughout the year to local butchers. Robert was Farmers Weekly Beef Farmer of the Year 2006.

Read more from all our Livestock Farmer Focus writers.