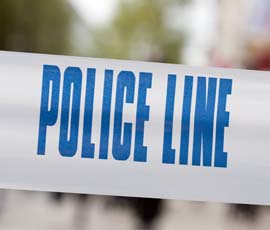 Kent Police is appealing for information after 15 sheep were found dead and injured which are believed to have been deliberately run over by a Land Rover.

Police were called to the field in Wrotham, west Kent just after 9am on 19 December 2011 when a local person found the sheep.

The police report that those that had not been killed in the attack were in great pain and distress. Some had limbs missing and broken and had to be humanely destroyed.

The sheep were found in a field off the A20 London Road which is also opposite the Tower industrial estate. The field is owned by the St Cleres estate near Kemsing but the sheep farmer is from Sussex.

The gate to the field had been opened and there were tyre tracks on the ground.

Police found part of a black moulded bumper bar which a serial number proves comes from a Mark I Land Rover Discovery.

Neighbourhood policing team inspector, Adrian Allen, said: “If anyone knows someone with this type of vehicle that has sustained bumper damage or hears or knows anything that they think is relevant, they are urged to call the police.

“This is a terrible crime that has resulted in great pain, distress and suffering and it is difficult to imagine who could do such a callous thing. We are keen to establish a motive for this attack as quickly as possible.”