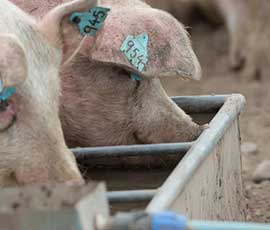 A group of environmentalists, chefs, food campaigners and celebrities are calling for an end to the ban on swill-feeding pigs in order to cut food waste.

The group, called The Pig Idea, plans to give out free pork meals in Trafalgar Square on Thursday (21 November), to raise awareness of their campaign.

They will serve pork from eight pigs which have been reared on a City Farm in London, on a diet of spent brewers’ grains, unsold fruit and vegetables and a tofu by product called okara.

They will argue that reviving the tradition of swill-feeding catering waste to pigs – banned in May 2001 after the foot-and-mouth crisis – would bring economic and environmental benefits.

The campaign group claims the most efficient thing to do with feed waste is feed it to pigs. The Pig Idea said a change in the law would cut the amount of waste going to landfill, reduce farmers’ costs and allow the wheat, soya and maize being fed to pigs, to be used for people instead.

Campaign founder Tristam Stuart, a food waste expert, said: “Humans have been recycling food waste by feeding it to pigs for hundreds of years. Reviving this tradition will help to protect forests that are being chopped down to grow the millions of tonnes of soya we import from South America every year to feed our livestock.”

Lizzie Press, acting general manager of the National Pig Association, said the organisation agreed with many of the sentiments of the campaign.

However, commercial pig producers would be unwilling to take the risk of feeding catering waste from the food chain because it had, in the past, led to major notifiable disease outbreaks.

“The risks associated with feeding [catering and household waste] are just too great and if things went wrong, we’d carry the burden,” she said.

The NPA has pointed out pig producers already feed 1.23m tonnes of waste products from the food chain, such as rapemeal, biscuit meal, cake and bread.

But these were products that had a clear, documented provenance and never came into contact with material from animal origins such as meat, fish or eggs.

“Notifiable diseases – predominantly foot-and-mouth disease, classical swine fever and African swine fever – can survive in meat for long periods and are easily transferred from meat to other produce, which is why feeding waste food to pigs is so problematic.”