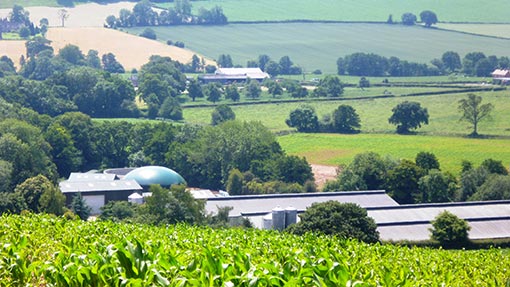 Hereford-based AD operator Ynergy says it is achieving optimum efficiency and saving about £20,000 a year on feedstock savings, since including an ammonia-reducing additive.

Owner Susan Shakesheff says the AD plant, at Great Ynys Farm in Herefordshire, ran into difficulties after just five months, when gas yield dropped significantly. This was attributed to the high nitrogen content of the poultry manure going into the plant, which also uses maize, grass and some cereals as feedstock.

The solution was found by adding 75kg of the additive BC.ATOX.Ncon for three consecutive days, followed by 10kg a day ever since.

“If plant biology is left to its own devices, bacteria and archaea can become imbalanced and unhealthy, resulting in poor gas yields,” explained Tim Elsome of supplier FM BioEnergy – a BOCM Pauls subsidiary. Plants looking to maximise gas yields needed careful monitoring and bespoke supplementation for the methane-producing bacteria to remain healthy.

At Great Ynys Farm, the broiler litter contained 27kg of nitrogen per tonne. But the addition of Ncon has reduced the ammonia’s inhibitory action, which means the 250kW AD plant is now able to use some 800t of chicken manure a year and is achieving a CHP run time of over 96%.

“Broiler litter currently stands at 26% of dry matter in our plant’s diet,” said Ms Shakesheff. “If we were to reduce the broiler feed and use a substitute feedstock, the annual additional cost to the business would be around £20,000.”