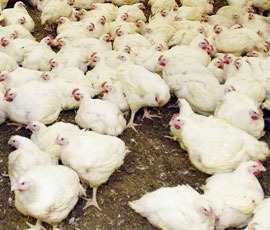 An Australian poultry company has been fined AUS$100,000 (£68,000) for describing its birds as “free to roam” when they were housed in confined spaces.

The nation’s consumer watchdog, the Australian Competition and Consumer Commission, found La Ionica, owned by Turi Foods, included the words “free to roam” in promotional material including signs and trucks. This was despite its chickens having a space equivalent to an A4 sheet of paper in which to move.

Turi supplies about 9.5% of the chicken eaten in Australia and had to remove signs from delivery vehicles when the ACCC raised its concerns.

As well as the fine, the company was ordered to take out full-page advertisements explaining the breach.

Two other Australian poultry companies, Bartter Enterprises and Baiada Poultry, and the country’s main industry body, the Australian Chicken Meat Federation, are continuing to fight the ACCC’s lawsuit over labelling.