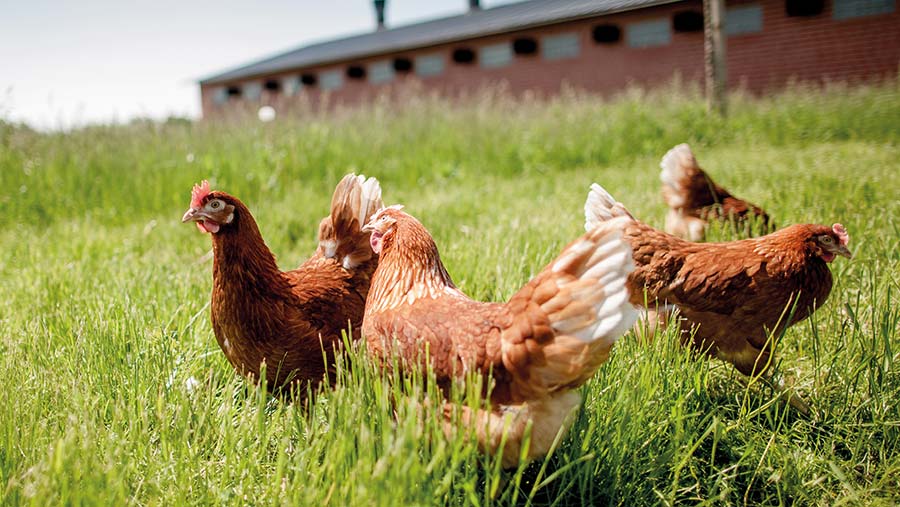 Northern Ireland’s free-range poultry producers will be able to let their birds go outside again from midnight on Tuesday 13 April, agriculture minister Edwin Poots has confirmed.

The housing measures were introduced just before Christmas to help stop the spread of avian influenza, which has been circulating in wild and commercial birds across Europe over the winter. Two cases were discovered in flocks in County Antrim in early January.

A similar housing order was lifted in Great Britain on 1 April, in response to the improving disease situation, though highly pathogenic H5N8 had been discovered in broiler birds on a farm in Staffordshire on 29 March and has subsequently been found in two captive peregrine falcons.

Announcing the decision to lift the housing requirements in NI, Mr Poots urged all birdkeepers, “whether they have just a few birds or thousands”, to continue to maintain strict biosecurity on their premises.

While the risk of bird flu has been assessed as “moderate”, the possibility of outbreaks is likely to persist for several weeks, he said.

NI’s chief veterinary officer, Robert Huey, added that the requirements of the avian influenza prevention zone still needed to be adhered to.

“The risk of avian influenza has not disappeared and infection may still be present in the environment,” he said. “Indeed, we have seen two further cases of notifiable avian influenza confirmed in GB in the last week.”

“I encourage members to ensure that strict biosecurity measures are put in place and maintained, including the cleansing and disinfection of hard surfaces, fencing off ponds or standing water, and the reintroduction of wild bird deterrents.

“When the birds are allowed out, it is vital that everyone pays extra attention to cleaning and disinfecting equipment, clothing and vehicles.

“Access should be limited to essential visitors only on sites, and workers need to change clothing and footwear before entering bird enclosures.”

What to do if you spot signs of avian flu

Avian influenza is a notifiable disease. Anyone who suspects the disease might be present should inform the relevant authorities in England on 03000 200 301, in Wales on 0300 3038268, and in Northern Ireland on 0300 200 7840. In Scotland, contact your local field services office.

Clinical signs to look for in birds include a swollen head, discolouration of neck and throat, loss of appetite, respiratory distress, diarrhoea and fewer eggs laid – although clinical signs vary between species of bird.