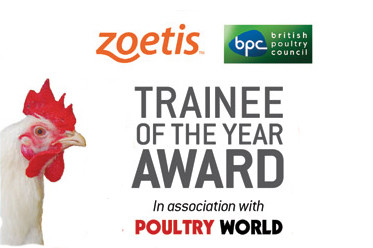 Trainees, who can be working on farm, in a hatchery or with game, have until midnight on 1 October to submit their applications to be in a chance of winning a £2,000 training grant from Zoetis and a £500 cash prize from Poultry World.

Polish hatchery worker Klaudia Rozkowska was last year’s winner. She came to the UK in 2005, joined Cargill Mears Europe at its Shobdon hatchery, near Hereford, 5 years later and now has a technical role focusing on improving hatchery performance and efficiency.

The award judges will choose 3 finalists and decide on the winner after interviews. The finalists will attend the British Poultry Council’s annual awards ceremony in the House of Commons on Tuesday 4 December when the winner will be announced.

Application entry forms can be found online at www.bhrcommunications.co.uk/pages/Zoetisform.html