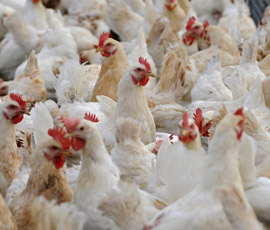 The debate around large-scale poultry and livestock farming has to shift away from emotion and focus on science if UK farmers are to be given the opportunity to produce more food in a sustainable way.

Addressing the recent British Society of Animal Science conference, its emeritus professor, Chris Warkup said too much emphasis had been put on the perceived welfare and environmental issues associated with large-scale production.

Instead more science had to be brought to the debate so decisions by planners, retailers, policy-makers and consumer could be based on fact.

“If people are to make a rational decision about large-scale systems we need to have a subjective assessment of the evidence,” he said. “Both large and small farms have the ability to deliver excellent welfare and environmental sustainability.”

Anne-Marie Neeteson from global broiler and turkey breeding company Aviagen agreed that scale was important. The United Nations had predicted that, by 2050, two thirds of the world’s population would live in cities. “If this prediction comes true, food production will need to be more concentrated.”

“As national economies improve, growing numbers will be able to afford to eat meat, and experience shows that they start with chicken.”
Anne-Marie Neeteson

Ms Neeteson explained that 70% of meat consumed globally was either pig or poultrymeat, and of that figure, 50% was poultry.

“As national economies improve, growing numbers will be able to afford to eat meat, and experience shows that they start with chicken,” she said. “This means that productivity will have to increase, with large, intensive farms probably located close to cities.”

Ms Neeteson maintained that to sustainably breed the number of chicks to supply the anticipated increased demand, breeding companies needed to be big.

To achieve these specifications, Ms Neeteson explained that a breeding company like Aviagen needed a variety of population, large datasets, continuous research and development, along with powerful computers and analytical programmes.

Too much emotion in ‘mega farm’ debate