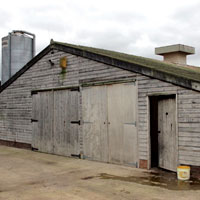 Britain’s broiler industry is facing a huge and growing backlog of investment caused by poor returns over the last decade, according to a new survey from the NFU.

More than a fifth of growing space is over 35 years old, well past the accepted normal working life of such buildings.

It means that the UK industry is increasingly at a competitive disadvantage and unable to enjoy the economic benefits of modern technology, such as up-to-date insulation and heat recovery techniques, claimed the NFU.

The survey results were presented at the Chicken 2009 conference at Stoneleigh Park last month by Herefordshire broiler grower and NFU member Kinsey Hern, who was the driving force behind carrying it out.

“Any producer will tell you that if he’s investing in his business he thinks there’s a return to be made. What this survey tells us clearly is that returns have not been good enough to justify investment in poultry,” said Mr Hern.

“When sheds are deemed essentially to have a life of 20 years, it seems incredible that three fifths of the shed space is over 20 years old.

“There were over 1500 sheds in the survey and only one in 10 has been built in the last 10 years. So it would take a considerable amount of investment and reinvestment to bring production space up to a modern standard, and to create a production base that would be able to support the demands of the public.”

Although there had been significant price increases recently, he believed they had to go still higher. “It has been at such a low ebb for such a long term a lot of the costs haven’t been taken into account.”

The buildings survey covered 30% of the UK industry, amounting to 2.2 million sq m. Mr Hern formed the idea of conducting it as a follow up to the Savills report commissioned by the NFU, which had shown that returns in the industry were particularly poor.

“I thought, instead of standing there complaining that we haven’t got enough money, we need to find out how much has been invested in the poultry industry, and when it’s been invested.

“I feel the success of the industry now relies on grouping together to make our argument a professional and constructive one.

“The supermarkets are a very important part of our industry. They have helped us by taking larger volumes, made us more efficient and look at our own businesses, but they have to be made aware that there has to be a profit if chicken is going to be there in the future.”

Charles Bourns, NFU poultry board chairman said the survey had confirmed their fears: “Poor financial returns are having a direct impact on the ability of poultry producers to expand production in line with a growing population or maintain it at current levels.

“A strong industry in the 1990s and Government grants in the 1970s helped build much of our production capacity. What we need is for Government, the supply chain, and the public to recognise that this industry needs to invest again, and soon.

“Every type of producer is suffering in the same way – the money available after feed, energy, chick and other costs are paid, has been little more than enough to survive, for at least the past 10 years.

“It is getting harder and harder for producers because of complex planning rules, environmental regulations, the loss of tax allowances and diminishing margins.

“Poultry meat is more important now than it’s ever been. As pressures on food supplies continue to build, it’s critical the UK has a fit for purpose and efficient farming industry. To overlook this now will be a huge mistake.”

Mr Bourns expressed concern that the recent fall in feed costs could prompt a cut in prices.

“We need to emphasise that if there’s a saving in feed, that money could be used to build sheds rather than to drop prices. “If prices start dropping we still won’t be getting the sheds built.”