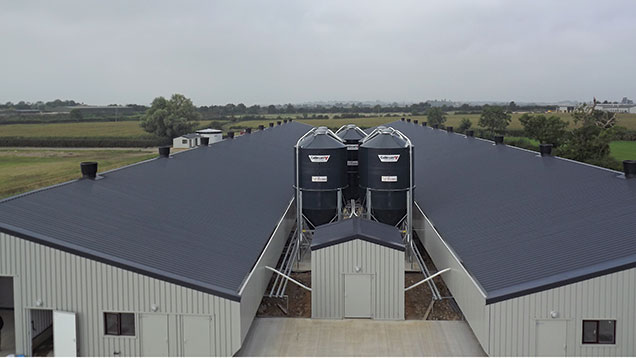 A dairyman diversifying into broiler farming has opted for an energy efficient, renewable-powered solution for his new sheds. Ken Randall went for a tour.

Across the country farmers are looking for a stable, reliable cashflow to mitigate volatility that other sectors in agriculture are prone to. For many, the answer lies in broiler farming.

Tim Juckes is one such farmer. He keeps a 500-strong dairy herd in Gloucestershire, but with three small children to provide for, was looking for a second enterprise, away from low prices in the milk market.

It was a decision he finally acted upon almost two years ago, setting out to construct two poultry sheds, each with a capacity of 50,000 birds, each measuring 340ft x 66ft. Each unit is heated by a 199kW wood pellet biomass boiler, which qualifies for the government’s Renewable Heat Incentive (RHI).

“The broiler business has always appealed to me,” says Mr Juckes. “I haven’t yet met anyone who isn’t happy and confident in the future of it.”

When it came to equipping the houses, Mr Juckes evaluated a number of systems before making a choice.

But it was a trip to Denmark, and seeing the Skov heating and ventilation system that really impressed him. He contacted the UK distributor, Derby-based LA Systems, which subsequently supplied all equipment for the new sheds.

Building and groundworks were completed by Morspan, as well as Connop and Son. It all made for a pain-free process, he says.

“I can’t tell you how much fun the build has been. The contractors make all the calls and everything turns up as it’s needed.”

One of the surprises of the whole exercise was the ease of getting planning permission.

“The planning process was exactly six months. We didn’t have any objections at all, and we had the parish council in favour and all the locals were excited about a new project.”

The permission came through last May, and the first birds arrived in the autumn, and are grown under contract to Faccenda.

The poultry operation will run alongside the dairy business and, with no dedicated manager, he and Julie will initially have their hands full.

“I haven’t got time to fully run this site and the cows, so I would like a site that is suitable for a manager, but I don’t think 100,000 birds is big enough to justify it.”

So two more sheds are planned, as soon as practicable.

The bank has been receptive to the project, he adds, and payback for the installation has been agreed over 12 years, but Mr Juckes feels it will be sooner than that.

Two key features of the new sheds are their fan controls and indirect heating system, both from Scandinavian climate control outfit Skov.

“A normal fan is either on or off. By using the inverters, we can speed them up or slow them down. Normally in a poultry shed the fans are all switching on in sequences as ventilation is increased, but they are all running at full speed.

With the Skov system, the roof-mounted fans will switch on and will build to 50% as they go through their multisteps, and only when they are all on will they will they then speed up to 100%.

“Also, unlike most inverters these ones don’t dump the excess energy as heat, and the electricity is saved.”

The key factor, explains Skov’s Henny de Haas, is that there is much less air pressure to overcome. “Instead of one fan at full speed, for example, you have two at half speed, and you’re not pushing all the air through one chimney. This is where the energy is saved.”

Delivering heat to the house from the biomass boilers is the Spiraflex system, which features a 37mm steel tube fitted with circular heat flanges running round the shed side walls.

Under minimum ventilation conditions, air is drawn in through the wall inlets, passes over the heating tubes and is jetted up to the apex, where it mixes with the hot pocket of air and descends over the birds.

“It’s a plain 37mm tube so there’s hardly any resistance. The pumps are rated at 180w for each house, equivalent to no more than a couple of light bulbs, where normally you would have a pump of at least half a kilowatt.”

The system is so efficient, he maintains, that smoke tests have shown the air circulation will operate by convected air alone, even when roof fans are switched off.

Another claimed benefit is uniformity. At the boiler end of the house, the hot water goes in at 80C and comes back at 60C, averaging 70C across the system.

Also, he points out, with systems that use a small number of radiators with fans, the chicks are attracted to the noise, encouraging clumping.

“All our customers speak of the uniformity in the flock. Uniformity is a key word in animal production,” says Mr Done.