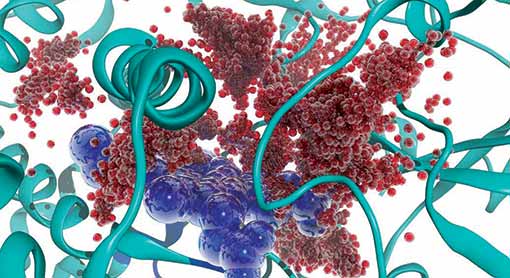 In the latest instalment of our sponsored series on gut performance with Elanco, we consider the effect of beta-mannanase in countering unwanted immune responses.

With profit margins becoming ever tighter, poultry producers are under pressure to maximise feed efficiency and growth rates in their flocks.

Feed-induced immune response (FIIR) is one cause of unproductive energy expenditure, which occurs due to inappropriate action of the immune system , explains Elanco’s poultry nutritionist Marco Martinez.

This happens when the bird’s defence mechanism mistakes beta-mannan fibres – found in feeds such as soya bean, sunflower, palm kernel, rapeseed meal and sesame meal – for harmful micro-organisms. Mounting an immune response to this perceived challenge uses up vital energy.

“Since soya bean meal is a major protein source in feeds produced around the world, beta-mannan is present in most rations,” says Dr Martinez. “It is estimated that 3% of a bird’s metabolisable energy could be depleted by FIIR, which has huge consequences for broiler feed conversion, body weight uniformity and overall productivity.”

But by including the enzyme beta-mannanase, which can be found in specifically formulated in-feed supplements such as Hemicell, it is possible to combat the FIIR by breaking down the beta-mannan fibres, so they are no longer recognised by the immune system.

“This means more energy is left available to the bird for growth, rather than being consumed by an unwanted and unjustified immune response.”

Research has shown the significant improvements in feed conversion and body weight uniformity seen with inclusion of these enzymes in broiler diets is primarily due to the breakdown of these beta-mannan fibres and prevention of the immune response.

A series of studies have been carried out at the University of Georgia to demonstrate the exact association between the beta-mannan content of soya bean meal and the amount of immune system activation.

The results showed that, as the beta-mannan content of the food was increased, the immune system stimulation also increased by a proportional amount. This confirmed the direct and detrimental effects of these fibres in the feed.

In addition, trials were carried out to evaluate the effects of the beta-mannanase enzyme on live performance and live weight uniformity at age of slaughter.

The results showed that the addition of pure beta-mannanase enzyme to the diet significantly reduced the immune response, increased 43-day weights by between 4.6% and 8.7%, and significantly improved liveweight uniformity.

These support the findings of other studies that suggest the enzyme can reduce the liveweight variance by 2% and also improve carcass weight without giblets.

“Overall, these recent studies demonstrate FIIR is a reality and can affect broilers’ performance, but that including the beta-mannanase enzyme in the diet has the potential to limit its effect and reduce the cost of mounting an unnecessary response,” says Dr Martinez.

“Improvement in liveweight uniformity in grow-out barns and improved feed conversion will translate to an improvement in the consistency of processed poultry products and increased productivity.”

Enzymes are highly specific catalysts that play a key role in many metabolic reactions within a broiler, including the digestion of food. They are required in the digestive tract to break down complex molecules such as proteins into smaller peptides that are then available for absorption. Phytases are the most common enzymes in poultry diets, increasing the availability of phosphorous to the bird and improving performance for reduced cost.

Beta-mannanase is a specific enzyme that binds with beta-mannans – plant fibres that the bird finds hard to digest and can interfere with glucose metabolism, while encouraging pathogenic bacteria to multiply in the small intestine. The enzyme breaks down the beta-mannan structure, degrading it into simple carbohydrate chains.

Beta-mannanase is contained in Hemicell, an enzyme-based additive, available in liquid concentrate form for post-pelleting application to feed.

For more than half a century, Elanco has been supplying products to help improve animal health and protein production in more than 75 countries around the world. The company is committed to research, development and implementation that benefits animals, consumers, the environment and farmers. For further information call 01256 353 131 or email elancouk@lilly.com