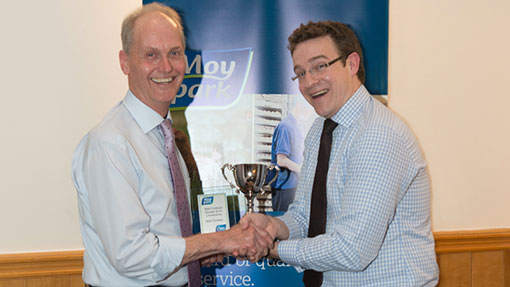 Moy Park has recognised its top-performing growers and farm managers from the East Anglia, Derbyshire and Lincolnshire at a special awards ceremony.

The event, which was held at the Belton Woods Hotel in Grantham, recognised those who have delivered “continuous and sustained improvement in agriculture standards over the past year”.

Moy Park’s Barney Kay (pictured with Nick Coulsey), general manager broilers, said: “Farming is at the heart of our business and we’re extremely proud to work with more than 800 of the very best growers from across the UK, who employ the highest standards on their farms.”

Moy Park recently launched a major grower expansion programme, which aims to increase breeder and broiler growing capacity by up to 400 poultry houses in Northern Ireland over the next 24 months.

Agriculture Director’s Champion Award for Best Performance for the Year