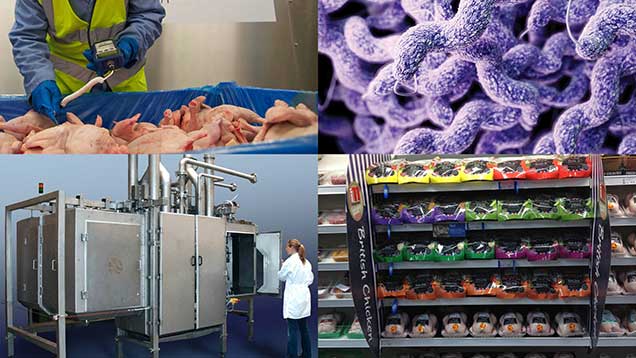 Fresh attempts are under way to get on top of campylobacter, as the poultrymeat sector awaits with some trepidation the results of the Food Standards Agency’s survey of supermarket chicken.

Those findings concerning campylobacter contamination levels at retail over the past six months are due to be published in the third week of November, and will give performance figures for each of the major supermarkets.

The whole poultrymeat supply chain is concerned how this will be reported by the national media, and what impact it may have on retail sales, which are already reported to be a bit subdued off the back of negative publicity in the summer.

Meanwhile, the industry battle against campylobacter is gathering pace.

Specially designed nozzles inside a treatment chamber are aimed at all parts of the carcass, including the visceral cavity. The decontamination process takes just one-and-a-half seconds, so does not affect line speeds. The trial is being set up at Faccenda’s Brackley slaughterhouse in Northamptonshire, which processes some two million birds a week. It will be independently validated by the Food Standards Agency.

If successful, Faccenda has committed to invest over £1m on this new method as a long-term means of containing campylobacter.

“We believe that SonoSteam can deliver a significant reduction in the number of cases of campylobacter food-borne infection attributed to chicken and will lead the way in setting industry standards,” said managing director Andy Dawkins.

Leading integrator 2 Sisters Food Group has also started its one-year thinning trial, involving about 35 farms supplying its Flixton slaughterhouse in Norfolk. All farms have undertaken a 25% reduction in stocking levels and the flocks are reared without thinning until the birds reach 2.2kg slaughter weight.

Producers taking part, mostly on company-owned farms, are also being offered a financial incentive for good campylobacter control. “The cost of this trial is significant, but it will tell us once and for all if thinning really is an effective intervention,” said a company source.

It is also understood that 2 Sisters is trialling blast freezing of chicken carcasses using the Air Products system at its Flixton site, while Moy Park is planning “a significant investment in rapid surface chilling” following “encouraging” initial off-line trial results. This will be on top of a £3m investment in research over then next three years.

Bernard Matthews is also poised to install a rapid surface chilling tunnel from gas supplier BOC at its Great Witchingham site in Norfolk next spring. According to group technical director Jerry Hall, 20 separate trials with the technology in the past year have seen a 90-96% reduction in campylobacter – “enough to meet the FSA’s target”.