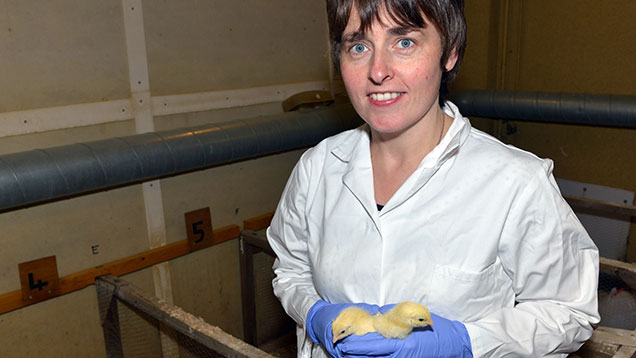 Field studies using a new technique to accurately predict the nutritive value of wheat for broilers are under way at the Agri-Food and Biosciences Institute in Northern Ireland.

“Wheat is the major component of broiler diets, but there is considerable variability in its nutritive value across different batches,” says researcher Elizabeth Ball. “This results in major differences in bird performance and is a significant cost to the broiler industry.”

In particular, the project is seeking an alternative to specific weight as a measure of grain quality. Currently wheat below 72kg/hl is either rejected, or wheat growers are subject to penalties, even though there is a poor relationship between this measurement and nutritive value. “Over recent years, poor weather conditions during the growing and harvesting periods have resulted in wheat with a low specific weight value and hence perceived low quality,” said Ms Ball.

“The poor growing conditions have negatively impacted on grain filling and may also have led to an increase in mycotoxin and microdochium level which separately, or in combination, will cause performance problems in birds.”

In the search for an alternative, AFBI has tested Near Infrared Reflectance Spectroscopy (NIRS) to see how broilers perform when offered a diet based on wheat at a particular grain quality.

Initial research under experimental conditions has established a robust relationship between the actual performance of broilers and the NIRS predicted average daily gain and predicted feed efficiency. Over 80% accuracy has been achieved.

“The primary objective of the new project is to undertake research that will validate these NIRS equations under commercial conditions,” explains Ms Ball. “The poor growing and harvesting conditions of previous years has provided the ideal opportunity to gain access to perceived low-quality wheat and enables work to be conducted which will help identify if and why such grain is of poor quality.”

The project also aims to establish if the moisture content of grain at harvest and subsequent drying conditions have a detrimental effect on quality.

A further objective is to investigate the effect of moisture content at harvest, and mycotoxin and microdochium level on the nutritive value of wheat for broilers.

The research is being funded by the Department of Agriculture and Rural Development for Northern Ireland, the Home-Grown Cereals Authority and poultrymeat company Moy Park.

Broiler trials are currently ongoing and it is planned that some results will be available later in the year.