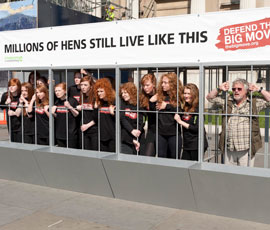 Compassion in World Farming (CiWF) has launched a new campaign in the lead up to the introduction of the 2012 conventional-cage ban on 1 January 2012 to pressure European nations to comply with the directive.

Across London, protestors lobbied the embassies of countries that many believe will not be compliant with the welfare legislation, such as Poland, and erected mock “battery cages” for humans in Trafalgar Square.

The four cages were each populated with five red-headed women, who the activists said symbolised the plight of hens due partly to the fact that laying hens are often red in colour.

“It is horrendous that hens are confined to barren battery cages,” said TV personality Bill Oddie. “EU countries have had up to 12 years to prepare, but some countries are wavering. If a decision is now undermined it will be truly outrageous. The ban must go ahead.”

In Europe animal rights groups affiliated with CIWF protested in Poland, Germany, The Netherlands, Finland, Latvia and Bulgaria highlighting the importance of the ban and demanding member states convert to enriched cages or other systems.

Following protest the activists marched to the European Commission’s office in London where they delivered a petition in support of implementing the cage ban.