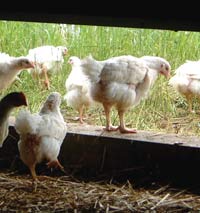 Organic poultry farms will barely be able to meet the challenge of tighter ration restrictions due to come into force next year.

The restrictions will see the non-organic allowance fall from 10-5%, producers were told last month.

A ration formulated from 95% organic ingredients was achievable, but it would be significantly more expensive and there was a threat to long-term supplies, nutritional consultant Cliff Nixey, told the recent Organic Producer Conference at Harper Adams University.

“Is a 95% organic ration possible? Yes, but only if organic soya continues to be available in sufficient volume,” he warned. And there were still likely to be problems with turkey starter diets, which needed 28% protein.

“If protein just slips to 25%, you can get poor growth and feathering,” said Dr Nixey.

The root of the problem with formulating organic rations was raising the protein content to a sufficiently high biological value with the ingredients approved for inclusion.

Available UK-grown protein rich ingredients alone could not meet poultry diet needs, said Mr Nixey. This meant suitable ingredients had to be imported over long distances, which was against organic ideals, and it was also hard to police their authenticity.

The amino acids lysine and methionine were the critical factors and the synthetic versions normally used in conventional rations were not permitted.

“Organic diets have a very imbalanced amino acid profile and they result in more wasted nitrogen being excreted into the environment.”

There were also potential welfare problems even from meeting the current 90% organic criterion, he added.

“More water is consumed when amino acids are imbalanced, with consequent wetter litter and possible welfare problems such as foot pad dermatitis.”

The best and cheapest source of the two limiting amino acids was maize gluten (prairie meal), which was widely used to capitalise on the 10% non-organic allowance.

But this was transported halfway round the world, derived from genetically modified maize, and had a very imbalanced amino acid content, leading to more nitrogen being excreted.

Among the UK-sourced ingredients, field beans and peas were the most useful, being a good source of lysine. But they had a low methionine + cystine content.

They also contained anti-nutritive factors, concentrated in the seedcoat, that depressed protein utilisation.

“Commercial de-hulling of UK protein-rich ingredients would greatly increase their nutritional value by increasing the available protein and reducing anti-nutritive factors,” he said.

Dr Nixey called for the approval by the EU of synthetic methionine and lysine in organic poultry rations as the best way forward.

“The approval of methionine as an ingredient would reduce the need for maize gluten and would enhance the value of peas and beans significantly by correcting their weakness.

“It would reduce nitrogen excretion into the environment, reduce wet litter and potential welfare problems, and reduce the cost of organic diets.”

But Susanne Padel from Aberystwyth University believed there was no chance of the commission changing its stance: “Trying to lobby for amino acids is a waste of time,” she insisted. Fishmeal was more likely to be approved in the near future, but only if it came from a sustainable source.

Dr Nixey agreed that fishmeal would be an extremely good source of protein, especially for home mixers. But it posed a serious obstacle for commercial rations because fishmeal could not be used in feed mills also making ruminant feed.