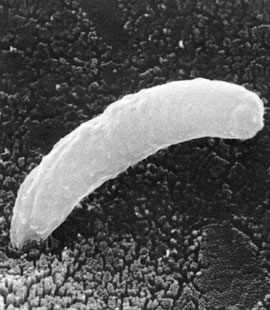 Coccidiosis is endemic to broiler production globally, costing farmers in the UK alone more than £40m in lost output and treatments each year.

Tom Jeffers, pioneering developer of anti-coccidial drugs and expert in the biology of the parasite, says continual disease control is essential to keep on top of the parasite.

“Eradication is not an option with this parasite, it’s just too prolific,” Dr Jeffers told Poultry World at an Elanco workshop in Derbyshire. “Overall control depends, not just on anti-coccidials, but on the developing immunity of the bird.

“In all of animal health [coccidiosis] is about the only disease one can think of which requires continual control,” he added. “We can’t grow broilers the way we currently do without medicating or immunizing them.”

An effective anti-coccidial programme should keep overt signs of coccidosis at a low level. “Otherwise it will have an immediate effect on feed efficiency and, of course, this comes right off the bottom line.”

A single coccidia, when ingested by the bird, can produce thousands more oocycsts which are shed in the faeces infecting an entire poultry shed in a matter of days.

It is this ability to rapidly reproduce which quickly renders ineffective chemicals and vaccines, as resistant strains of the parasite reproduce in greatly increasing numbers over a short period of time.

“Chemicals have a fairly simple mode of action, given that they affect the same chemical pathway,” said Dr Jeffers. “Even with a single mutation, the coccidia can often bypass that point to go on and develop right in the presence of the drug.

“That can shift that whole population over to a resistant population. Barring the opportunity of using a different chemical, the producer would be in bad shape.”

Dr Jeffers is the co-creator of the anti-coccidial drug, Maxiban. This is based on ionophores, created in a fermentation process, combined with a chemical to produce a strong anti-coccidial effect.

“Ionophores do not eliminate cociddiosis, but keep it at a very low level, preventing clinical coccidiosis which would cause intestinal damage. It allows enough production to allow immunity to develop.”

Dr Jeffers said a main concern was the lack of investment into developing other methods of controlling coccidiosis, leading to an over-dependence on Maxiban.

Questions from the floor

How long should Maxiban be used for?
There is value starting the programme at day one on farm. 0-28 days is the optimal period.

Will long term use of Maxiban lead to resistance development?
Field experience from the USA has shown it to retain its anti-coccidial effect.

Why do you get coccidiosis in new poultry sheds?
This often comes from other farms on boots, equipment or vehicles.