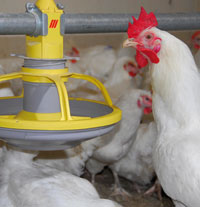 CIWF said the consultation launched by DEFRA yesterday meant that the government was abandoning its previous recommendation that the maximum stocking density for chickens should be 34kg/sq m and instead increase the maximum permitted density to up to 42kg/sq m.

Chief policy adviser Peter Stevenson said: “This is a huge step backward. This proposal is dangerous in that it makes consumers think that the law protects chickens, but in fact it will simply give a veneer of legislative respectability to factory farming.

“We were immensely disappointed with the EU directive when it was first agreed in 2007. Now the UK is planning to lower its standards to come into line with the directive, giving a green light to the continuation of intensive poultry production.”

But the British Poultry Council pointed out in last month’s Poultry World that the higher stocking density would only be permitted under a derogation. And that “the extra restrictions that would apply were so onerous that the council believed few producers – if any – were expected to take up the option”.