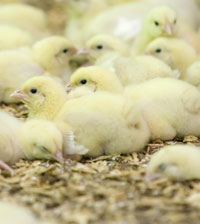 DEFRA is to consult broiler producers in early 2009 on new rules which for the first time enshrines in law welfare standards for broilers. It will also be the first to focus on welfare outputs with flocks routinely monitored at abattoirs for signs of poor welfare and acted upon.

Due to come into force by 30 June 2010, the EU directive will see a maximum stocking density of 33kg/sq m, with the possibility of increasing the figure to 39kg/sq m providing producers meet prescribed standards.

The most interesting aspect was that for the first time in EU welfare legislation, welfare outputs would be monitored and acted upon, said the British Poultry Council chief executive Peter Bradnock.

He said producers who complied with the Assured British Chicken Production scheme were already meeting almost all the standards set for the 33kg/sq m maximum. These included twice-daily flock inspection, appropriate staff training, the provision of dry and friable litter and keeping records of numbers, mortality rates, and usable area per bird.

The directive would allow member states to derogate for producers who wished to stock birds at up to 39kg/sq m, said Mr Bradnock. But they must notify the authorities of their intention, and provide a full description of management systems, including feeding and watering arrangements, lighting, and floor and litter type.

In addition, there would be strict limits on levels of ammonia and carbon dioxide, and standards for temperature and humidity. Flock keepers at the higher stocking rate would also need to maintain detailed records for three years, outlining bird numbers and movements, as well as mortality rates and their causes.

A further derogation would permit producers to operate a maximum stocking density of 42kg/sq m. But the extra restrictions that would apply were so onerous that he believed few producers – if any – were expected to take up the option.

While the BPC is largely supportive of the new directive, in its aim of improving bird welfare throughout the EU, some council members feel that the lighting intensity level stipulated could prove to be a problem for the birds.

This requires a minimum intensity of 20 lux in 80% of the usable area of the housing, unless a vet gives contrary advice. However, new research had shown that birds actually preferred more variation in lighting patterns and this had been reaffirmed by members’ own experiences, said Mr Bradnock.

The directive also outlines new requirements to monitor welfare outcomes at the slaughterhouse. Official vets will check birds for any signs that indicate a welfare problem on the farm. If it is suspected that welfare is being compromised, the producer will be asked to take remedial action and set improvement targets, which will be followed up by the local animal health officer.

“The fine detail has not yet been decided and we are keen to avoid overburdening producers with too much pointless red tape, that will have no real impact on improving welfare,” said Mr Bradnock.

“But talks with all parties involved in the UK interpretation and implementation of the directive have been harmonious. We believe DEFRA officials, when they assure us that they have no intention of ‘gold-plating’ the directive in the UK regulations,” he said.

The broiler welfare directive will not apply to parent flocks, chick brooding and hatching, flocks with fewer than 500 birds, and free-range and organic units.