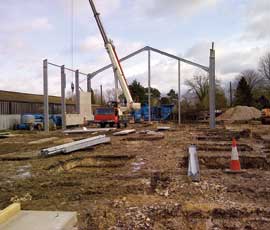 Poultry integrator Moy Park has notified Ballymena Council that it intends to seek planning permission to build up to 400 more poultry sheds in the county, as it ramps up capacity to meet growing supermarket demand for chicken.

A letter sent to the chief executive of the council from its local planning division says a dedicated project team has been set up to handle the applications.

“Recent food scares have impacted confidence and trust among the public and, as a result, consumers are increasingly sourcing locally produced food and retailers are responding positively.”

The letter adds Moy Park expects to submit 150-200 applications in the coming months, and these will be streamlined by the planning authorities, providing they do not attract opposition and are not subject to an environmental impact assessment.

It also points to employment opportunities for farmers and the construction sector.

The news comes as British Poultry Council chief executive Andrew Large has warned that demand for British chicken is in danger of outstripping supply if planning permission for new sheds remains difficult to obtain.

He told the Daily Telegraph that planning permission applications for new sheds were taking too long, and the BPC had been pressing ministers to improve the process. “Decisions that should take 13 weeks are taking more than 18 months,” he said.

He added consumers had preconceptions about poultry farms’ smell and lorry movements that were often outdated.

Meanwhile, the latest chicken statistics from the NFU indicate an extra 47,000t of broiler meat was produced in the UK from the turn of the year to August, when compared with the previous period.

This was put down to Tesco and other retailers’ commitments to source 100% fresh British poultry, as well as strong demand due to competitive pricing.

The Telegraph report puts domestic consumption at 2.2 million birds a day, 70% of which is British.