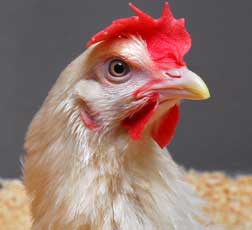 Genetics and breeding for resistance are at the forefront of efforts by companies and researchers to protect farm animals against diseases.

“Genetics will increasingly walk hand-in-hand with vaccination to address many of the diseases that confront us,” Prof Ivan Morrison, head of Infection and Immunity at the Roslin Institute, told a recent gathering of vets and industry leaders in London.

“Until recently, the business of mapping those genes has been a slow process, but this is accelerating rapidly. I think in the next decade there will be genes that will be identified and they will be used as markers to identify animals which have disease-resistant traits.”

Recently the Roslin Institute has been involved in creating a series of transgenic chickens which were unable to pass on the H5N1 avian influenza virus to other birds. Researchers also isolated the gene responsible for featherless necks in Transylvanian naked neck chickens, important for breeding birds in hot climates.

Prof Morrison said that research into diseases that affect chickens and humans – such as H5N1 – was a good way to encourage the acceptance of transgenic technology.

“If transgenesis is going to be acceptable, then applications like this which have major implications for preventing human health problems is something which could be a potentially justification,” he said.

Dr Jim McKay, group director for science and technology at the EW Group, owner of poultry breeding company Aviagen, said his organisation was still looking at breeding for resistance among birds, but was not considering the use of transgenics.

“Experiments such as the Cambridge/Roslin collaboration on AI are very attractive and they clearly show introduction of some transgenes may make larger differences than we can make by conventional genetics.

“But our commitment as a group is to maximise the natural variation available to us now and to incorporate that as efficiently as possible.”

The conference was organised by the Institute of Animals Health (IAH) and the Biotechnology and Biological Sciences Research Council (BBSRC).

Campylobacter tough for even the best

Researchers and breeders speaking at the Institute of Animal Health conference in London have said they are working hard on fighting campylobacter but the virus presents unique challenges for vaccination.

“Campylobacter is a highly variable pathogen. It is possible to vaccinate against various strains of the disease, but at present there are no approaches that target all strains,” Professor Ivan Morrison, of the Roslin Institute said.

Director of the Jenner Institute at the University of Oxford, professor Adrian Hill, said there was a human vaccine again campylobacter in trials and if it was successful it could be adaption for use in poultry.