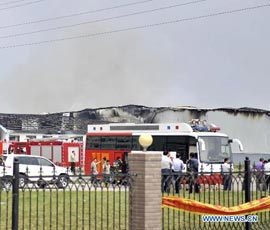 A massive fire at a chicken plant in north-east China has killed at least 119 people, according to the state-run Xinhua news agency.

The fire broke out just after 6am on Monday (3 June) in the slaughterhouse owned by the Jilin Baoyuanfeng Poultry Co, about 100km north-east of the provincial capital Changchun.

More than 300 workers were in the plant when the fire began and the gates were locked, said the agency. People living nearby said they could smell a pungent odour and some suffered headaches.

“I started working at 6am, along with another 100 workers in my workshop,” Wang Fengya, a 44-year-old female worker told Xinhua. “Soon after, someone shouted ‘run away’ and we quickly ran to the exit. Suddenly, the lights inside went out and the plant got quite dark.”

Wang said she fell down and hurt herself. “When I finally ran out and looked back at the plant, I saw high flames.”

Established in September 2009, Jilin Baoyuanfeng Poultry Co has 1,200 employees and an annual output amounting to 67,000t of chicken products.

According to the BBC, the provincial fire department suggested there may have been an ammonia leak associated with the plant’s cooling system, which either caused the fire or made fighting it more hazardous.

Xinhua said the complicated interior structure of the prefabricated plant and the narrow exits impeded the rescue work. The exact number of people trapped inside had yet to be confirmed, it added, pointing out that about 100 workers managed to escape and the fire was put out at noon.

For all the news and detailed features on the UK poultry industry, subscribe to Poultry World, the industry’s premier title