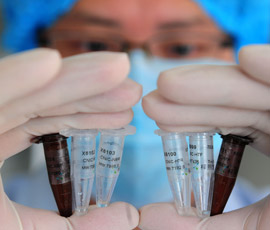 Increased salmonella testing charges are on the way for egg and poultry farmers, following an announcement by the Animal Health and Veterinary Laboratories (AHVLA) that it is moving to full cost recovery for some of the work it does.

The salmonella national control programme (SNCP) and Poultry Health Scheme in particular are affected, with charges for the former going up by as much as 26%, with effect from 24 June.

In a letter to stakeholders, AHVLA chief operating officer Nina Purcell explains that fees have not been updated for several years and do not reflect the full cost of service provision.

“For the first time, most services will also be charged at a variable rate, rather than at a fixed fee, to more accurately reflect the time taken in undertaking pieces of work,” she says.

“For the first time, most services will also be charged at a variable rate, rather than at a fixed fee, to more accurately reflect the time taken in undertaking pieces of work.”
Nina Purcell, AHVLA chief operating officer

For the SNCP, this means that different sectors will face different charges, with breeder flocks facing the highest charge of £96/sample – up from the current flat rate of £76/sample, (see table).

Broiler growers and turkey producers will also see higher charges, though the cost for layer flocks is actually coming down.

These charges are being introduced in one step to achieve full cost recovery this year.

A worked example for a laying unit puts the charge at £129, based on a £60 sampling fee and 90 minutes sampling time. On top of this there will be £15/sample lab fees.

The Poultry Health Scheme, which registers and approves birds and eggs for exports, will also cost more for flock keepers and hatchery owners, as the AHVLA moves from 76% taxpayer support to full cost recovery over the next two years.

The first phase will see flock registration charged at £210, plus £23 for every 30 minutes of the veterinary officer’s time involved, plus any lab testing fees. These charges are expected to increase again next year.

A spokesman for the AHVLA said the charges were essential to ensure that those who benefit from its services should pay, rather than the taxpayer.

It had also taken steps to drive down costs, including new computer systems and staff reductions.

The AHVLA also plans to charge for travelling times for its staff, starting next year.