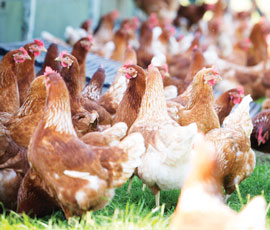 An outbreak of infectious laryngotracheitis (ILT) has been creating a headache for poultry producers in Northern Ireland, having spread from a single farm to 23 to date.

Northern Ireland has had “about half a dozen” outbreaks of ILT in the past, according to St David’s Poultry Team vet Mike Alcorn, who has worked closely on this outbreak.

“When we’ve had it, it’s been a slow spreading disease, confined to one site and we’ve been able to get on top of it by depopulating,” he said.

“In the past it’s been a virus from vaccination that’s gone wild, but this is a novel field virus, behaving completely differently to what we’ve experienced until now.”

The virus was first discovered on a commercial free-range laying unit near Ballymoney, North Antrim, in August.

Mr Alcorn said an attempt to “slaughter out” the virus was thought to have been successful, until a large broiler unit about two miles away, developed classic signs of ILT.

“The farm was depopulated as fast as possible, but unfortunately we started seeing a string of different cases,” he said.

A cluster of farms in the surrounding area has since become affected, spanning broiler breeders, laying birds and broilers.

The virus has had a heavy financial cost as well, according to Mr Alcorn. “In terms of layers, the minimum that we’ve experienced is a 15% drop in productivity, some older flocks have ceased to lay.

“Mortality has ranged from trivial to an almost complete wipeout,” he added.

Mr Alcorn said the problem would probably be solved by routine vaccination, but those with multi-age sites faced a “series of unpleasant choices”.

“The ILT vaccine has a propensity to revert to a viral form. You can vaccinate pullets when they arrive, and eventually see some spread, not vaccinate and hope for the best. Or you can vaccinate while in lay,” he added.