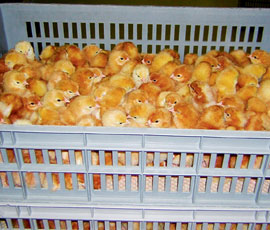 Hatching company Joice and Hill is set to become the sole supplier of ISA layers in the UK, following a restructuring of the distribution arrangements by parent company Hendrix Genetics.

Both have a roughly equal share of the ISA business in the UK, and together they supply around 40% of the layer market.

A statement from ISA managing director Serve Hermans explains that the process of consolidation, (since Hendrix took over Joice and Hill in 2010), had created some “anomalies”.

“While keen to respect history, contracts and relationships, it is nonetheless important to Hendrix Genetics that egg producers have a clear, efficient channel to the breeding programme,” he said.

“We have endeavoured to find solutions that are acceptable for clients and the two distribution outlets, both of which have a long history with the brands. Ultimately, this has proven unsuccessful.

“As at 31 January 2014, the current agreement with Tom Barron Independent Hatcheries will cease.

“Following this, Joice and Hill will become the distribution outlet for all ISA products in the UK and Eire, (although Tom Barron Independent Hatcheries will likely continue to supply during the run-off period, following termination of their contract).”

Joice and Hill managing director Nick Bailey said the decision brought clarity to the situation, while the two-and-a-half-year lead-in would give the company time to expand its hatching facilities.

This would involve further investment at the company’s Eye Green Hatchery, near Peterborough, building on the existing capacity for 10m chicks a year.

“The evolving market means our customer requirements dictate a certain level of production capacity not possible with two separate smaller distribution entities,” he said. “The move will also improve efficiency of production and the provision of customer support. Product quality remains as the key focus of the Joice and Hill operation.”

The Tom Barron Group is expected to remain a key player in the UK poultry sector. It already supplies pullets of a range of breeds and undertakes contract rearing for other suppliers.

It also owns Fayre Game – the UK’s largest producer of quail and quail eggs – and is involved in dairy farming and milk processing.