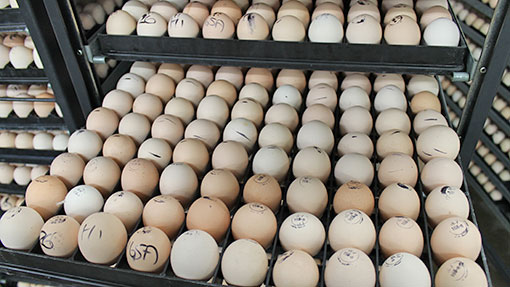 Poultry breeding company Aviagen and hatchery equipment manufacturer Petersime have developed a new incubator based on the Short Periods of Incubation During Egg Storage (SPIDES) principle.

Initial trials by Aviagen showed that heat treatment during storage can improve the hatchability of eggs that have been stored for longer than normal. For example, eggs stored for seven to 14 days were found to have 2-3% increased hatchability – and much more when stored for more than two weeks.

“SPIDES will not completely recover the decreased hatchability caused by long egg storage, but it can significantly limit the losses,” said a statement. More recent field tests have also demonstrated some benefits for fresh eggs.

The latest stage of the project has seen a specialist, commercial machine, developed by Petersime for the effective delivery of a SPIDES programme, installed at the Aviagen egg distribution centre in Scotland.

“The possibility of using Petersime’s OvoScan technology to monitor and control egg shell temperature was very attractive to us, because it will make it much easier to deliver a precise heating programme while having variable machine loading depending on our planning needs,” said global hatchery development manager Dinah Nicholson.

“We deliberately chose our egg distribution centre in Scotland, rather than an actual hatchery, as the location for this test because it is a centre for storing and distributing eggs to order. Eggs are sent from there to Aviagen hatcheries all over Europe; being able to treat the eggs before they start their journey should make a big difference to how well they hatch at their final destination.”

Roger Banwell, hatchery development manager at Petersime, added: “SPIDES is a very promising method, but it imposes specific demands to the incubator in terms of heating and cooling. Precisely controlling variables such as egg shell temperature is crucial in this process.”

Longer storage times are a particular challenge for GP hatcheries as they cannot always be avoided due to variable order sizes.