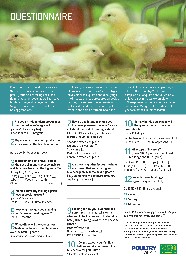 A joint Poultry World and NFU questionnaire launched this month aims to lift the lid on the pressures faced by the poultry sector.

After conversations with a number of farmers up and down the country, Charles Bourns, NFU poultry board chairman approached Richard Allison, Poultry World editor, with the idea of conducting a questionnaire.

Mr Bourn’s conversations with producers suggested the sector could be on the verge of not being sustainable. So to bring its plight to the attention of politicians and decision makers, it was decided to survey producers and publish a detailed report afterwards.

In February a firm plan was put into place over lunch in London. Fast forward six months and the finished questionnaire was published in the latest issue of Poultry World.

Maria Ball, NFU chief poultry adviser, said: “The time is ripe now because I think we’re seeing that both sectors, egg and meat, are on a knife edge. It is important to gauge where farmers stand with respect to the next five years. This questionnaire will provide sound evidence so that barriers, or blinkers, can be lifted.”

The brief questionnaire will only take five minutes to complete and all responses will be treated in the strictest confidence. Simply print off the form and send complete forms to Poultry Questionnaire, NFU, Food and Farming Department, Agriculture House, Stoneleigh Park, Warwickshire, CV8 2TZ or fax to 024 7685 8501.