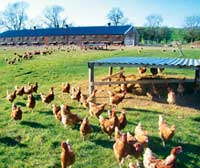 Free-range egg producers spend a great deal of time trying to keep their pasture in good order and avoid disease build up. But how to get the best results? Wendy Short reports.

The fact that hens are descended from forest-dwelling Asian jungle fowl plays an important role in setting up a range which will be used evenly throughout, says ADAS adviser Alison Wintrip.

The number one priority is providing adequate cover, she says, to make the birds feel safe when they venture outside.

“Free-range areas should allow the birds to exhibit natural behaviour, such as perching, scratching, pecking and dust bathing,” she says. “In the wild, hens will roost on low branches in trees from four weeks old, moving higher up once they reach six weeks. The birds scratch and feed in the humus under the trees, picking up a variety of insects, berries and seeds, as well as grass and weeds.”

The extent to which birds will range varies from flock to flock, so there is plenty of scope for improvement in most situations, she points out. Birds which range widely tend to be healthier, more productive and better feathered.

“Wide free-ranging is also good PR for the poultry industry, enhancing the image of egg production in general,” says Mrs Wintrip. “It can also provide valuable nutrients.” A study of hens allowed access to a mixture of forage crops found they consumed an estimated 10-30g of grass and clover per day. These intakes met around 70% of the birds’ total daily lysine and methionine requirements.

Research has also shown that birds are more likely to use the range simultaneously when they are kept in small flocks. Groups of up to 500 birds ranged together, while the figure dropped to 5%, in flocks of more than 1500.

While breed is also considered to have an effect on ranging behaviour, early management techniques are thought to be influential. If birds are given the opportunity to range at an early age – six weeks, for example – they are more likely to explore the range fully when they reach adulthood.

“Efforts to extend the ranging area are rewarded by easier management, as damage to the sward is diluted over a wider area. By avoiding severe poaching around the pop holes, the birds’ feet stay cleaner and drier, with a beneficial effect on litter quality.”

Drainage is one of the most important aspects of maintaining a good sward and attracting birds to the area, Mrs Wintrip says. When planning new housing, a site with free-draining soil and a low water table is preferable, where circumstances allow. However grass may wilt in hot weather, if the land is too free-draining.

Compaction and below-surface panning should be minimised during site preparation. Areas where run-off could contaminate water courses should be avoided. Soil treatments on existing sites could include mole ploughing, topsoil aeration and liming, with field drainage installation and maintenance also helping to create the right environment for the birds. Short, hard-wearing species of grass should be selected for sowing, with longer, more nutritious grasses at the far corners of the range used to attract the birds to feed.

“Paddocks should ideally be split into four sections, and rotated every four to six weeks. The best position for housing is in the centre of the range, with pop holes down both long sides. This will allow the producer the opportunity to close one side of the building in wet and windy weather, and open the pop holes on the more sheltered side.”

Another useful idea is to construct walkways, to take the hens past damaged sward and into areas of fresh grazing.

Plastic ground netting can be effective, as it allows the grass to grow through, while preventing digging. Ramps in the house are another way of keeping the birds’ feet clean, and reducing denuding.

Mrs Wintrip admits that it is more difficult to maintain biosecurity in free-range flocks, because it is impossible to keep wild birds away. There is also a greater risk of predation, and worm burdens can build up on pastures, unless hens are treated on a regular basis.

“The only way to control the worms is to use an effective programme during lay,” she says. “This should be established after discussion with the vet, as advice will be specific for each farm. Faecal samples can be taken, to determine the level and type of any parasites present.”

Worming treatments should be linked to the pre-patent period, which relates to the time from egg/larvae ingestion, to the adult worm laying new eggs in faeces. The pre-patent period varies from 25-60 days, depending on specific infestation:


The RSPCA’s Freedom Food standards have been changed to allow a higher stocking density – up to 2000 birds/ha over the lifetime of the flock – so long as certain standards are met.

These conditions include establishing a designated area for dust bathing, perching and foraging, and paying particular attention to pop holes to reduce poaching around the immediate area. Another stipulation is to ensure that the perimeter of the range extends to no more than 350m away from the housing.

RSPCA senior scientific officer, Alice Clark says more detailed conditions to qualify for the new higher stocking density may be developed over time, though a degree of flexibility will be maintained to cover the wide variety of farm situations.

Mrs Clark notes that the industry was fully consulted before the standard was introduced, and says participating farms will be monitored, with help and advice given where necessary.

“The main aim is to encourage the birds to roam the entire area, and to keep the pasture in good condition, minimising poaching wherever possible,” she says Mrs Clark. “The provision of cover is important, along with managing problem areas, where stones or bark can help to reduce puddling.”

Andrew Hall diversified into free-range hens last year, to supplement the income from his beef, sheep and arable enterprises. The farm produces to the Freedom Foods standard, using the higher stocking density rate of 2000 birds/ha. His first flock went in during November, with the eggs sold through the Eggsell farmer co-operative.

Mr Hall says he did not find it difficult to meet the additional standards required for the higher stocking density. As well as providing the birds with a range of different types of cover, including hedgerows, bushes and fallen trees, he has spread rubble around the pop holes, to reduce poaching, and will apply lime to the grassland on a regular basis. Covered sandpits are also provided.

At present, the range covers one large area, but he plans to split it into several sections at a later stage. Sheep are grazed on the paddock, to keep the grass from growing too long.

“The management plan required is fairly detailed, setting out the features of the range where improvements have been made, and updating the information as further adjustments take place,” says Mr Hall.

“The system is working well, with about one-third of the hens covering most of the range at any one time,” he says. “I am finding that most of the requirements that are beneficial for the birds are also useful for flock management.”

When Poultry World visited, egg production stood at an impressive 97.5%.