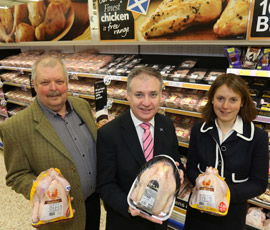 Tesco has announced that all fresh poultry sold in its 194 stores in Scotland will be reared on Scottish farms.

The supermarket anticipates sales of around 200,000 Scottish-grown chickens a week, coming from “more than 20 approved farms” and sourced through 2 Sisters.

Tesco, which committed last February to selling 100% British chicken by July this year, said in a statement that every line it sold in Scotland, from Everyday Value to Finest and Organic, would be labelled with a Scottish saltire, as well as the Red Tractor logo.

It added that poultrymeat lines from its core product upwards would be reared to higher than Red Tractor standards, with birds being housed in “large, naturally lit houses with bales and perches to encourage bird health and welfare”.

Richard Lochhead, cabinet secretary for Rural Affairs and Environment, said the move was a major boost to the country’s poultry sector. “Showcasing the provenance and origin of our food is vital at a time when traceability is high on the agenda, and consumers and producers alike will welcome the new commitment to increasing local sourcing.”

“Tesco’s commitment to put Scottish-reared chicken on its shelves gives their customers the guarantee of fantastic, tasty local produce. That commitment is great for the future of chicken farming in Scotland.”

The move currently covers fresh chicken only, but a spokesperson said that, as part of Tesco’s commitment to sourcing more British produce, the supermarket hoped these lines would include more British poultrymeat in the future.