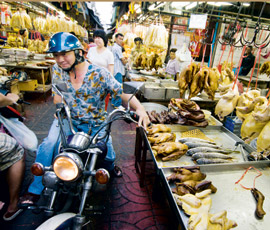 Thailand is poised to return to a leading position in the global poultrymeat market, offering stiffer competition to Brazilian suppliers of fresh chicken to the EU, according to Dutch bank Rabobank.

The EU announced recently that it would be easing restrictions on imports of fresh poultrymeat from the country on 1 July, following a nine-year ban in the wake of the avian flu outbreaks in 2003.

Rabobank believes the move to readmit Thai product could lead to significant price cuts in the EU. Its forecasters predict that Thailand’s raw chicken production will grow by 20% by 2015, raising competition in the marketplace.

“The end of the ban could cut prices for consumers at a time when they have been hard hit by inflation in other foodstuffs,” the bank said in a new report called The Return of Thai Raw Chicken.

In the EU, it is expected there will be an influx of 92,000t of chicken, with Brazil being worst affected by the increase in competition.

The expected re-opening of the Japanese market could put further strain Brazil, as Japanese imports of Thai chicken are set to reach 150,000t within the next few years, while imports from Brazil are expected to fall by 100,000t to about 250,000t, Rabobank believes.

“For Brazilian producers the stakes are high. EU and Japan represent 12% of Brazil’s total exports based on volume, although the two region’s importance in value terms is significantly higher.”