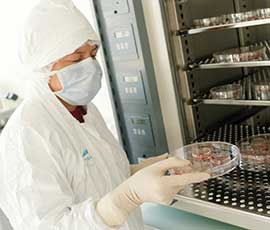 A research project has been launched to identify genes in poultry that make birds tolerant to hot climates and resistant to infectious diseases – specifically Newcastle disease.

The project aims to increase chicken production in rural Africa, with the goal of breeding birds better able to survive challenging climates, and so increase food security.

It is estimated infectious poultry diseases are responsible for the deaths of about 750 million birds a year on the African continent.

A new genomics lab at the University of California has been set up with the aid of a $6m (£3.7m) grant from the United States Agency for International Development.

“Increasing the production of chickens and eggs can have a dramatic impact on the livelihoods of poor rural communities.”
David Bunn

“Developing a chicken that can survive Newcastle disease outbreaks is critical to increase poultry, meat and egg production in Africa and in other regions of the world,” said David Bunn, director of the new lab.

“Increasing the production of chickens and eggs can have a dramatic impact on the livelihoods of poor rural communities,” he added.

Homestead and small-scale poultry production is considered to have enormous potential for alleviating malnutrition and poverty in Africa’s rural communities.